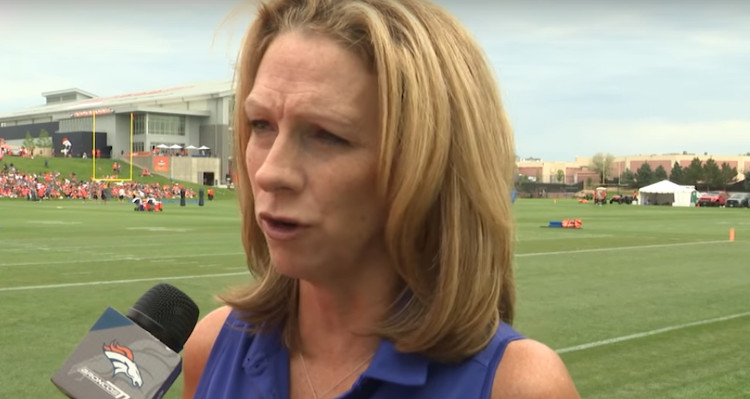 Beth Mowins excelled in sports throughout her life, so it’s no surprise that she became a sportscaster. Now, she’s a respected and admired media personality. She became the first woman in over 30 years to announce for an NFL game, thereby breaking the glass ceiling and inspiring young women to pursue their passions.

Not many people appreciated Gayle Sierens in 1987 when she called a regionally televised Chiefs-Seahawks game, becoming the first woman ever to call the NFL on TV. Though she never returned to the booth, by calling the game she started an extraordinary chain of events. Back then, when Beth Mowins’ father was in Syracuse, New York, he saw Sierens’ story and photo in the newspaper and showed it to his daughter, who had been broadcasting neighborhood football games into a toy microphone. Mowins recalled, “I was already a budding sportscaster back then. What she was able to do so many years ago … to see what she had done, and sort of plant the seed in my mind of somebody else has already done this: I can do it, too.” Here are some details from Beth Mowins’ wiki.

Beth Mowins was on Monday Night Football to call the Los Angeles Chargers and Denver Broncos, and became the first woman in 30 years to broadcast in the booth at an NFL game. She also became the first female NFL announcer for a national broadcast.

Born on May 26, 1967, in Syracuse, New York, Beth Mowins’ age is 50. She is a play-by-play announcer and sports journalist for ESPN and CBS, who usually calls women’s college sports. Mowins had a passion for sports since she was young. She was a basketball, softball, and soccer player in high school, and later became the captain of Lafayette College’s varsity basketball team for two seasons. She graduated with a B.A in 1989 and earned a Master’s degree in communication from Syracuse University.

She’s Terrific at What She Does

Mowins began her career as a news and sports director for WXHC-FM Radio in Horner, New York. She wanted to be a sportscaster after watching The NFL Today on CBS, and was soon calling high school games as a teenager. Mowins recalled, “I also knew pretty early on just from watching a lot of sports on TV that I wasn’t going to be the coach or I wasn’t going to be the guy that played in the NFL or in Major League Baseball. But that other guy, the play-by-play guy, maybe that was a role that I could do.” CBS Sports Chairman Sean McManus thinks that this is just the start for Mowins and he sees her calling other games in future seasons. “Beth was hired not because she’s a woman but because she’s a terrific play-by-play personality. I’ve listened to her for years, and she’s excellent,” he said.

Avery's got next #MNF pic.twitter.com/6TMyng6r9W

There is no information about her personal life so details about Mowins’ relationship status is unknown. Currently, she lives in Saginaw, Michigan, and likes to keep in touch with her fans and supporters. Beth Mowins’ Twitter account is a testimony of her close connection with them. Her fans love her just as much as she loves them, with some tweeting words of encouragement as she made history: “Congratulations, @BethMowins! We’re so proud to support you as the first woman to announce a Monday Night Football game.” Mowins is grateful for all the support she received from her fans and will continue to break barriers in order to follow her dream.