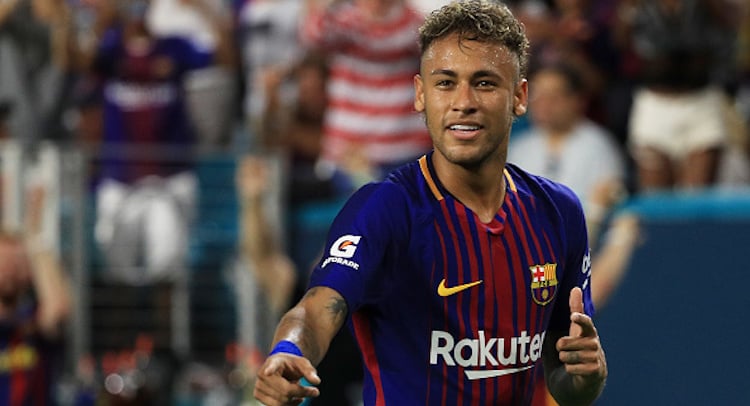 Over the past few days, rumors have been circulating the Internet about the decisions being made over Barcelona soccer player, Neymar da Silva Santos Júnior’s career. The 25-year-old is about to become the most expensive soccer player in the world, as the Brazilian is poised to earn over $676,900 per week, when he signs an upcoming five-year contract. How rich is Neymar? What is Neymar’s net worth? What is his final decision? Everything you need to know about Neymar’s career move is coming right up!

Why did Neymar leave Barcelona? That’s the question millions of fans are wondering, as the former Barcelona player said goodbye to his teammates on Wednesday. Conflicting reports about his decision has essentially caused chaos among fans over the past two days, and despite the tremendous offer from Paris Saint-Germain (PSG) to buy out the player, La Liga’s president is clear that he won’t let Neymar go without a fight! Here’s the latest news, plus some fun facts about the talented athlete’s impressive net worth!

At first, reports said that he would fly from China to Paris to complete his move. Then, the rumors changed, saying that he had just arrived in Dubai to undergo a PSG medical. That changed too; he would allegedly travel to Brazil from Dubai to clear up any doubts about his future. Other rumors then spread that he was returning to Barcelona, and not Brazil, to meet his father and entourage to make his final decision. The message changed once more, that he would return to training in Barcelona on Thursday. All of this confusion has not only made Neymar’s team scratch their heads, but also his fans from around the world!

Players transfer to different teams and change their contracts all the time, so why is Neymar’s contract change-up such a big deal? This is because at only 25 years of age, the Brazilian forward is now on his rise to the top–and he’s already so good! To see a player of his level and talent leave a team like Barcelona, is almost unheard of. Barcelona is usually the team that players with great skill go to when they exceed the stature of their previous clubs. The real question now is, why is PSG so attractive to Neymar when he already has it so good with Barcelona? All you really have to do is look at the salary Neymar was offered. Talk about swimming in the dough! His new salary will be about $260.0 million! La Liga, however, isn’t going to hand over Neymar so easily. It’s president, Javier Tebas, threatened and declined to accept the payment.

What is Neymar’s net worth? How much does he earn from his sponsorship deals? The ace player’s net worth is an estimated $105.1 million, and he makes a shocking $23.7 million per year from his various sponsorship deals. One of his biggest and longest-running endorsement deals is with Nike. That deal is worth $115.6 million over the course of 11 years. That’s $10.5 million per year! Additional sponsors include Gillette, Panasonic, Red Bull, Replay Jeans, Beats by Dre, and Gaga Milano watches.

Neymar’s recent salary at Barcelona was $12.0 million per year. This is quite remarkable for player so young, but it does not come close to the salary of his teammate Lionel Messi, who made $44.0 million last season. If everything works out with his switch to the Parisian team, he will be only nine weeks away from making that and more with his new team. Actually, over the course of the five-year deal, he could be making over $335.0 million in total, making him the highest paid athlete in the world, shadowing the previous record holder Cristiano Ronaldo, whose base salary was $52.0 million. Damn!

Neymar reportedly owns an Audi R8 Spyder, valued at over $117,000; a Porsche Panamera Turbo with a price tag of over  $78,000; and of course, a yacht. Neymar’s house does not appear to be listed, but if everything works out with him and PSG, he might be living in some nice digs in France pretty soon! It’s a lot of money to enjoy alone, so people are wondering who is Neymar’s girlfriend? According to various reports, he is involved in an and on-and-off relationship with Brazilian actress, Bruna Marquezine.