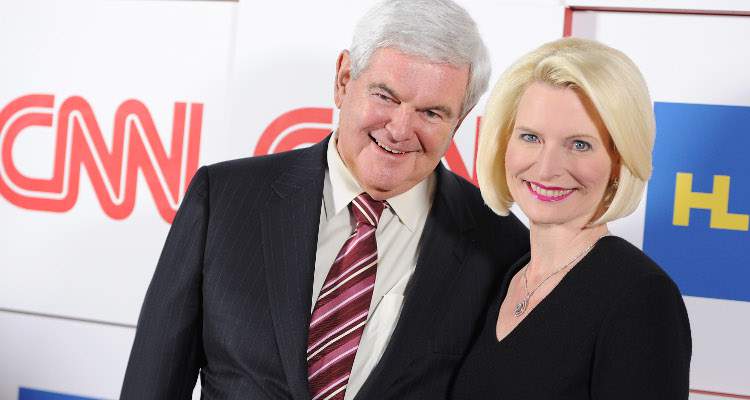 Newt Gingrich was slated to be in a shoo-in for Donald Trump’s cabinet. But he politely declined, and instead supports the Trump administration from the sidelines. While he somewhat deflects the media attention from the Trump administration to Hillary Clinton and Al Franken, his wife, Callista Gingrich is doing a great job holding an office in the government. But Newt and Callista Gingrich’s marriage started out on a scandalous foot.

Keep reading to know more about their relationship, right here.

Callista Louise Bisek, affectionately called Callie Lou by her family, was born and raised in Wisconsin. Her father, Alphonse Emil Bisek, worked in a packing plant and her mother, Bernita, was a secretary. She has Polish and Swiss ancestry from her parents.

She graduated from Whitehall Memorial High School in 1984 and was named the valedictorian of her class. From a young age, she had learned music and trained in classical piano, and she played the French horn. She attended Luther College on a scholarship where she majored in music.

The music major is a long-time choir member of the Basilica of the National Shrine of the Immaculate Conception in Washington. Through the Gingrich Foundation, she established a scholarship for music majors.

The Choir of the Basilica of the National Shrine and the CUA Chorus and Orchestra perform in concert this evening at the Basilica at 7:30 pm. Join us!

She Worked on the Hill

Gingrich was already familiar with working in Washington before she met her future husband. Straight out of college, she interned in the office of Republican Congressman Steve Gunderson.

When her internship ended, Gingrich joined Gunderson’s congressional staff and worked there until 1995. Soon after that, she worked as the chief clerk of in the House Committee on Agriculture until 2007.

After leaving the House Committee on Agriculture, Gingrich became a prominent face in politics when Newt Gingrich announced his bid for the 2012 presidential election. She was by his side when he campaigned to be the Republican nominee and had several speaking appearances. She introduced her husband at the Conservative Political Action Conference that year and met with women support groups and his supporters.

While Newt Gingrich opted to not be a part of the Trump administration, his wife was sworn in as the U.S. Ambassador to the Holy See. Callista Gingrich’s Instagram account contains many posts about her experiences in Rome.

First Sunday of Advent in Rome.

She Produces Books and Films

Outside of politics, Gingrich is a famous author and documentary film producer. She is the President of Gingrich Productions, a multimedia production company she founded with her husband.

The company is a major producer of historical and public policy documentaries, books, and newsletters. In her capacity, she makes numerous TV and media appearances.

The couple has hosted documentary films together like The First American, Divine Mercy: The Canonization of John Paul II, A City Upon a Hill, America at Risk, Nine Days That Changed the World, Ronald Reagan: Rendezvous with Destiny, Rediscovering God in America, Rediscovering God in America II: Our Heritage, and We Have the Power. Their documentary on the late Pope John Paul II was critically acclaimed worldwide.

The 51-year-old has also authored children books on a character she created called “Ellis the Elephant.” If you were to go to one of her book signings, you’re likely to be introduced to her husband and patriotic pachyderm character that travels through American history. Gingrich’s books have been named New York Times bestsellers for children’s picture books.

Court documents indicate that Battley tried to stop the divorce process to no avail. Their divorce was finalized in 1980, and Battley died in 2013.

Six months after his divorce was finalized, Gingrich married Ginther. However, their marriage was rocky since Ginther didn’t like living in the public eye, which came with being a politician’s wife.

Gingrich and Ginther were still married when he began an affair with House of Representative staffer, Callista Bisek, who was 20 years his junior. His marriage with Ginther ended in 2000, as it’s alleged that she rejected his offer to have an open marriage.

Newt Gingrich denied the claims, but people were noticing a pattern. Four months after his divorce from Ginther, he married Bisek. They have been together ever since, and Gingrich has admitted they started out as an affair.