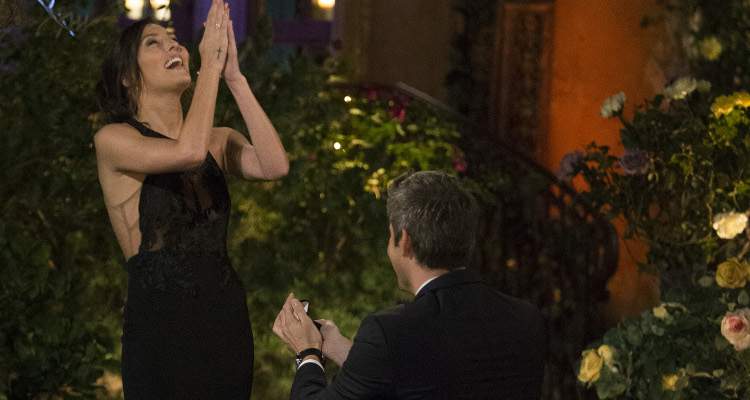 On last night’s (January 8) The Bachelor, Arie gave out Neil Lane earrings and a diamond necklace on his first one-on-one date with Becca. Things are obviously getting intense from the get-go. Is Becca the one who’ll walk away with more Neil Lane diamonds?

Arie is only in the second week of his televised love quest and he’s already handing out Neil Lane diamonds. It looks like he’s really starting to get serious about these ladies —because who is so generous on the first date? Becca not only got the first date of the season, but she was also swooped off her feet with some sparkling jewelry and designer duds. Is this a prediction for what’s to come at the end of the season? Get the scoop on Becca’s one-on-one date here.

Diamonds in the Sky

This week opens with the ladies getting chummy, like they should do, until Chris Harrison tells them their friendship won’t last and promptly brings out the much-coveted first date card. The honor of the first one-on-one date this season goes to Becca Kufrin.

The date was extravagant by every definition. Arie shows up in his Fonz best and they go on a motorcycle ride to a fancy house in Malibu. Celebrity style guru, Rachel Zoe is waiting for them there and Becca forgets all about Arie.

It turns into a mini fashion show with Becca trying on Rachel’s designs and showing them off to Arie. The girl’s date couldn’t get any better when Rachel gifts the outfits to Becca! Seriously, does a girl have to simply go on a date with Arie for free designer wear?

Get your motor running! Arie and Becca K. speed away! #TheBachelor pic.twitter.com/JDe8ndMsai

Becca’s date was far from ordinary. In fact, she is one step away from a Pretty Woman remake. While Zoe packed up Rachel’s new outfits so she could make the ladies at the Bachelor mansion green with envy, a representative from Neil Lane showed up. The designer supplies the blinding engagement rings every season. So a visit from the jeweler this early is a big deal!

No engagement rings for Becca right now, but she got earrings and a diamond necklace which are, frankly, better than one ring. Don’t bother looking for the prices of a Neil Lane necklace. You —just like every other contestant— might start making plans to get rid of Becca’s body after taking the diamonds.

What girl doesn’t want to try on designer gowns in a mansion?! This surprise from next week’s episode is majorly WOW-worthy, presented by @Olay Whips! Don’t miss more #BachelorWOWmoments on our Instagram Story tomorrow, hosted by @Ashley_Iaconetti!

With an array of sparkling dresses and even more dazzling jewelry, all Becca needed was a pair of shoes to complement them. Enter Arie and a pair of Louboutins. Becca is officially at the top of the world!

She’s so ecstatic drowning in her big name freebies, Becca doesn’t even entertain the ladies back home. Nope! Rebecca Kufrin doesn’t kiss and tell. She just puts on her new ensemble and goes for the evening portion of the date, where they have a heart-to-heart.

Is it even first date protocol to give diamonds? Becca doesn’t care! Diamonds are a girl’s best friend and all that. What about Arie? His generosity won’t hurt his pocket too much.

I know that I'm late on the #Bachelor but here's my hot take on Becca K.'s date: it feels very much like Pretty Woman. pic.twitter.com/d3kPGUlKv3

ABC pays for the majority of the production costs for the dates, including the expensive trips for the contestants, the fancy dates and their locations, and the Neil Lane engagement rings. It’s unlikely that Arie paid for the clothes, shoes, or the ice he gave Becca.

If you thought that the race car driver spent thousands of dollars on gifts for the first date, you need to go to Bachelor school. The extravagance won’t go to waste either since Becca is the clear frontrunner to walk away with Arie and a Neil Lane engagement ring to go with her necklace.

She already got a preemptive proposal during the season premiere, the first one-on-one, and Neil Lane jewelry. Even Rachel Zoe thinks they have chemistry. How’s this for a sign? Rachel Lindsay gave Bryan Abasolo an expensive watch on their one-on-one date and they ended up getting engaged. Just sayin’…

We’ll just have to wait and see how it all goes between Becca and Arie on The Bachelor season 22 every Monday at 8:00 p.m. EST on ABC.

"These feelings right now are what the beginnings of a relationships should feel like." – Becca K #Bachelor pic.twitter.com/Jkn1WPAcsM