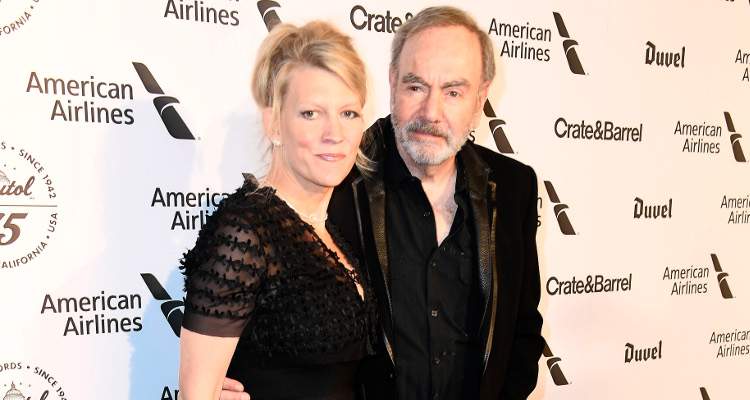 Iconic crooner, Neil Diamond announced that he’s retiring from touring after being diagnosed with Parkinson’s disease. Now that he’s not on the road, perhaps he’ll spend more time with his family and wife, Katy McNeil.

Neil Diamond canceled his tour days before his 77th birthday after being diagnosed with Parkinson’s disease. The iconic singer will spend more time with his muse and wife, Katie McNeil Diamond, now that she doesn’t have to manage his busy schedule either. Neil Diamond is famously in love with his wife which makes them even cuter. Find out about the woman who married to one of the greatest singers ever in Katie McNeil’s wiki.

Neil Diamond met Katie McNeil, a young Californian woman almost three decades his junior, when he was filming a concert documentary. McNeil was a video producer at that time, working on his 2009 documentary, Hot August Night/NYC.

Some time later, she left production and became Diamond’s manager. They dated while she went about her managerial duties. He introduced her as his girlfriend on Twitter and proclaimed he was “lovestruck.”

But McNeil wasn’t initially thrilled about jumping into romance. “Part of me said, ‘Don’t get involved; he’s a client,’” she confessed, “There are a lot of complications for a lot of reasons. But our chemistry grew into something that couldn’t be denied.”

McNeil produced several concert documentaries, including Mötley Crüe: Carnival of Sins. She was also a producer on the official soundtrack of Van Wilder 2.

After two years together, they got engaged with Diamond tweeting the announcement like the songwriter he is. “Good news coming from sunny LA/ and you’re the first I want to tell/ Katie & I just got engaged/ and I hope you wish us well,” he wrote.

Good news coming from sunny LA/ and you're the first I want to tell/ Katie & I just got engaged/ and I hope you wish us well. Neil

A 71-year-old Diamond and 42-year-old McNeil tied the knot in 2012 in L.A. The private ceremony was attended by family and close friends of the couple. While this was McNeil’s first marriage, Diamond had experience walking down the aisle twice before.

His first marriage was to Jayne Posner, his high school sweetheart. The “Sweet Caroline” singer has two daughters, Marjorie and Elyn, with the teacher. After separating in 1967, they divorced in 1969.

Diamond married for a second time in 1969 to production assistant, Marcia Murphey and has two sons, Jesse and Micah, with her. Their marriage of 25 years ended in the ‘90s, after which he had a publicized romance with Rae Farley.

Soon after his wedding with McNeil, the singer gushed about his new wife while touching upon his previous marriages:

“I had every possible chance to do it right. Both are spectacular women. I felt if I couldn’t make something wonderful and lifelong happen with them, then maybe I wasn’t capable of it. But I’m throwing myself back in because I like being married. I don’t want to end this whole fabulous journey alone. I want someone by my side who I love and who loves me. I’ve finally found somebody who’s up to the task of being my wife, because I’m very high maintenance.”

Katie McNeil was the inspiration that fueled Diamond’s 2014 album, Melody Road. “There’s no better inspiration or motivation for work than being in love. It’s what you dream of as a creative person,” the songwriter said, “I was able to complete this album — start it, write it and complete it — under the spell of love, and I think it shows somehow.”

Though she was the muse, Katie wasn’t part of the songwriting process. Diamond, a disciplined songwriter for decades, doesn’t allow a peek of his material until after it’s recorded. Katie didn’t get a special preview of the songs she inspired.

We can’t feel sorry for Katie though. After all, she can be serenaded by Neil Diamond any time she likes!