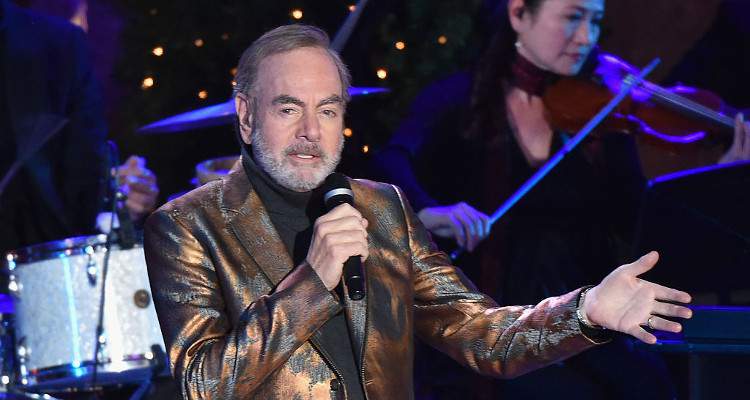 Fans have enjoyed legendary crooner Neil Diamond’s music for the past five decades. However, the singer announced his retirement from touring on Monday, January 22, 2018, because of his Parkinson’s disease diagnosis. He will continue to write and record songs as he turns 77 on January 24. With a large body of work behind him, classic songs, and a massive net worth of $175.0 million, Neil Diamond has cemented his place as one of the greatest singers of all time.

It’s a big disappointment for Neil Diamond’s millions of fans, after the singer announced his retirement with a heavy heart:

“It is with great reluctance and disappointment that I announce my retirement from concert touring. I have been so honored to bring my shows to the public for the past 50 years. My sincere apologies to everyone who purchased tickets and were planning to come to the upcoming shows.”

The third leg of Neil Diamond’s 50th Anniversary tour was canceled, including the dates in Australia and New Zealand, which were scheduled for March 2018.

Owing to the sales of his albums and singles, concert tours, and online music sales, Neil Diamond’s net worth is estimated at a massive $175.0 million and growing.

Neil Diamond’s Net Worth Compared to Other Singers

– Neil Diamond’s career started in a low-key way with the release of his first two singles, “You Are My Love at Last” and “I’m Afraid,” which did not prove to be very successful.

– He worked even harder as a songwriter after that, and things started working out for him with the success of singles like “Cherry, Cherry” and “Solitary Man.”

– Today, Diamond is recognized as one of the best singer-songwriters of all time

-Some of his songs that propelled him to superstardom are “Cracklin’ Rosie,” “Longfellow Serenade,” “Song Sung Blue,” “If You Know What I Mean,” “Sweet Caroline,” “You Don’t Bring Me Flowers,” “Red Red Wine,” “America,” and “Heartlight.”

Also Read:  Dolores O’Riordan’s Net Worth in 2018: How Rich Was The Cranberries Singer When She Died?

-Although Diamond earned a lot of money through his singing career, he had to part with a large amount when he divorced his wife of 25 years, Marcia Murphey, in 1994. According to sources, Neil Diamond’s divorce cost him a hefty $150.0 million (roughly half of his estate at that time), which he had to give to Murphey.

– Neil Diamond owns several homes, including one he recently purchased in Malibu, California. In early 2017, the singer bought a five bed, seven bath spread in Encinal Bluffs in Malibu for a cool $7.25 million.

– Diamond also owns a beautiful house in Beverly Hills, California, where he spends his time.

-While informing fans that he would not be touring anymore, Neil Diamond gave them a reason to be happy: “I plan to remain active in writing, recording in other projects for a long time to come. My thanks goes out to my loyal and devoted audiences around the world. You will always have my appreciation for your support and encouragement. This ride has been ‘so good, so good, so good’ thanks to you.”

His fans love him and never want the ride to stop but his classics will always be hits with his fans.