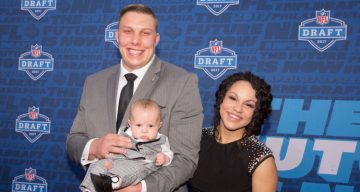 Garett Bolles was picked by the Denver Broncos in the 2017 NFL Draft. As he stepped up to the NFL draft stage, the giant carried his tiny son. Is Garett Bolles married? Who’s the mother of the newest little Bronco?

Making it through the NFL draft is definitely something you want to share with your family. While Takk McKinley took a framed photo of his late grandmother up to the podium with him, Garret Bolles took his wee little baby, who looked extra tiny next to his giant of a father. Who is Garett Bolles’ wife? He had a long journey before going pro and his wife was by his side through it all. Here’s what you need to know about Garett Bolles’ wife and son.

With a physique like his, Garett Bolles won’t look out of place wearing a decorated military uniform instead of the Broncos jersey. He’s got the aura and everything! Well, that’s because he’s the son of a Navy veteran, and a prodigal son at that!

But it wasn’t all good for Garrett, as he struggled along the way. Garett had gotten involved with the wrong crowd, which got him into trouble with drugs and the law. His father, Grove Bolles kicked him out of their Utah home when Garett was 19, with nothing but a bag of clothes. He knew he was heading down a bad path and even spent some time in jail after being caught for vandalism. Garrett still reflects on those tough times saying, “I was a lost kid …I was confused, angry, like ‘What am I doing in here? This isn’t who I really am.'” Well, things have certainly improved for the young athlete since then, and Garett and his father, Grove have managed to patch things up recently, as well.

I'm very lucky to say I have 2 people that have played huge roles in my life!!!! The picture on the left is my real dad and I couldn't be more thankful to be his son. He has taught me to never give up and to always find a way to make life better for others. He's also taught me to work hard. This man has gone through a lot in his life but has always put his kids first in everything and I'm so lucky to call him dad and I love you so much pops! The other picture on the right. Is my best friend! @ggfreeman I couldn't be more proud to call him my other dad! I love this man so much. He has taught me about life and has given me a chance to live my dreams. This is the man that picked me up off the streets and has given me a place to live and a job when no ones else would! He has played a huge role in my life and has given me a boost to where I'm at today! I couldn't be more proud to have him in my life and he has raised me into the person I am today. I love you! I am so blessed to have both of these powerful father like figures in my life. I love them both so much and just wanna wish them a special day! Happy Father's Day! I love you guys!!

It was a rough childhood for Bolles. He changed schools several times and even earned some jail-time for vandalizing a rival school’s property. But after his father kicked him out, it was his high school lacrosse coach, Greg freeman and his wife, Emily who took him into their home, cleaned him up, and laid down some seriously strict rules to get him to turn his life around.

The Freemans thought Bolles wouldn’t last long before they’d have to kick him to the curb, too. But in a manner which brings to mind to The Blind Side, Garett changed for the better.

#3. Getting Invested in Religion

The NFL newcomer will turn 25 in May —a little old to be drafted in 2017. That’s because he didn’t play college football straight out of high school. After graduating from high school (which was no easy task given his teenage troubles) he joined LDS mission in Colorado Springs for two years.

After completing his two-year mission, the Freemans motivated Bolles to give football another try. So, he enrolled in a junior college in Utah where he played college football for two years. He transferred to the University of Utah in 2016. In his only season at Utah, he was named a first team All-Pac-12 selection. He decided to forego his senior year to enter the 2017 NFL draft.

Once he turned over a new leaf, Garett Bolles found love. He married his girlfriend, Natalie Williams, who now goes by Natalie Bolles. There’s not much known about her yet, but we’re sure we’ll be seeing a lot of this newcomer in the Broncos wives circle. She’s already making heads turn at the 2017 NFL draft!

The couple is active on Twitter and Instagram and most of her posts are about her football-playing hubby. Garett, on the other hand, likes to show off his family. They recently celebrated Natalie’s birthday at the beach and shared it on Twitter.

Nothing is better than spending time with my beautiful wife and my sweet baby boy celebrating my wife's birthday. I love you Natalie. pic.twitter.com/3xTKFbLE8z

Bolles really loves children. He was at a children’s hospital earlier this week with the other draft prospects, carrying his white helmet for the little patients to sign it for him. He wanted them to know their autographs mean a lot more than giving autographs away. And he’s going to preserve the signed helmet forever!

A few weeks before the 2017 NFL draft, he was at the hospital where Natalie gave birth to their son, Kingston. With his birth and Natalie’s support, Garett Bolles was able to patch things up with his father. At the draft, fans got to watch as four-month-old Kingston was carried on stage by his father, being hoisted Lion King style with Bolles’ gigantic Broncos jersey.

Touted for his athleticism, Bolles was the 20th overall pick in the first round by the Denver Broncos. In an interview with Deion Sanders, the NFL pro-turned-analyst leaned towards the infant saying, “Does Kingston know that Daddy’s rich now?” Oh he’ll know.

Faith drives my family and my family drives football. Without them I wouldn't be where I am today. I love my beautiful wife Natalie and my sweet baby boy Kingston. They are a blessing in so many way. I can't wait to have them by my side through this amazing dream and journey of playing in the NFL. #LetTheGrindBegin