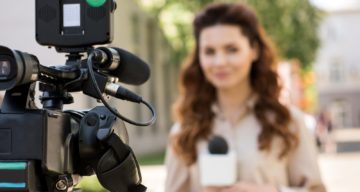 Dallas residents won’t be seeing Fox4 anchor Natalie Solis for a while. But her absence is not a bad thing. Solis and her husband, Texas sports radio host Craig Miller, are expecting their baby girl very soon. KDFW viewers are well aware, as Solis was at the studio well into her pregnancy. She’s taking some time off to focus on upcoming parenthood, and her regular viewers are excited for her. New viewers and social media users are also discovering Solis and her work, and want to know who this journalist is. So we have all the details in this Natalie Solis wiki.

Natalie Solis was born on January 30, 1976, and hails from San Antonio. She said her mom, Tina Wachtendorf (nee Aldaz), raised her as a single mother.

On Instagram, Natalie often wishes her brother, Xavier Solis, a happy birthday. He currently works for a bike shop in Tennessee.

Natalie’s grandfather, Dante, passed away in 2017. He was a World War II veteran.

Tina Wachtendorf hoped her daughter would follow a conventional career. After graduating from Incarnate Word High School, Natalie Solis enrolled at Brown University. She was initially on the pre-med track, as her mother wanted for her.

However, Solis wanted to tell the stories of people she met. Inspired by her uncle who also works in the broadcast industry, Solis decided she wanted to be a journalist.

So she changed tracks and graduated from Brown with a BA in political science and government. Soon after, she went to New York when NBC News offered her a job.

A then-22-year-old Solis, however, was not prepared to settle into such a major role. So she soon left and traveled to places she’d dreamed of.

She returned to reporting at a station in New Jersey, before heading to Miami, Florida, in 2003. Working at WSVN kept her busy, especially during the hurricane season.

She returned to her home state of Texas three years later, this time settling in Dallas. She has since become recognizable as the anchor and reporter on KDFW Fox4.

Natalie Solis married Craig “Junior” Miller on November 4, 2019. He is, of course, the famous sports radio host and one half of the Dunham and Miller Show.

The couple is expecting their first child together. Solis announced through her official social media pages on July 26 that “Baby Girl Miller” is due any day now. So she will be taking time off broadcast to focus on childbirth and their newborn.