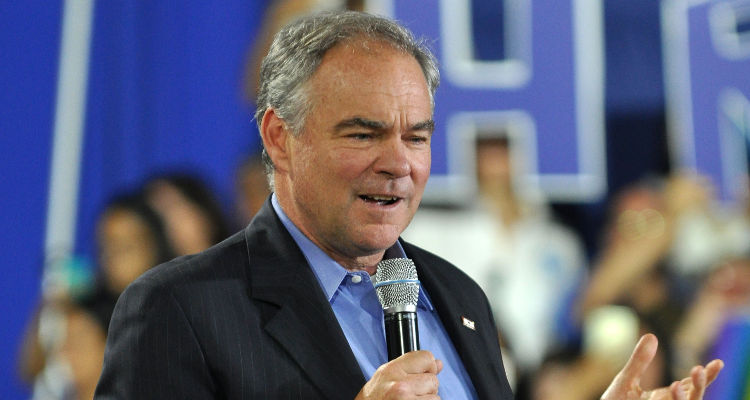 Tim Kaine with son Nat, who is now a Marine, in 1990. Never a dull day in #VApolitics. https://t.co/zvL61V3Wcn pic.twitter.com/MFvtvmMEU4

#5 He is One of Three Children

Tim Kaine’s wife, Anne Holton is the former Secretary of Education of Virginia. She is the daughter of former Virginia Governor, Linwood Holton, and a celebrity in her own right. The power couple has three beautiful children together: 26-year-old, Nat, 24-year-old, Woody, and 21-year-old, Annella. Upon Holton’s insistence, all three Kaine children attended public schools in Richmond, a cause their mother feels strongly about.

A graduate from Georgetown University ROTC, Kaine was a Marine reservist and is currently serving in the Marines. He has been on active duty since 2013. His sister Annella, now studies theater at NYU’s Tisch School of Arts, and his brother Woody, is a film blogger.

The Marine unwittingly became the focal subject of his father’s speech, in a debate against his opponent George Allen while he was running for the U.S. Senate in 2012. Tim Kaine argued that he would not decrease the Pentagon’s budget, as his own son was in the military and thereby, won the Senate seat.

#2 He Attends Church with His Family

Nat Kaine is a devout Catholic and attends Church with his family in Richmond, Virginia. The Kaine family actively takes part in the sermons, held at St. Elizabeth Catholic Church. His father Tim Kaine said, “My faith is central to everything I do. My faith position is a Good Samaritan position of trying to watch out for the other person.”

As a family man, Tim Kaine was naturally concerned about his political career, and the effect it would have on his family. After all, it’s not easy to grow up in the public eye. He said, “I feel concerned for his children. Anne comes from a political family so it’s not new to her, but it’s new to the children… It’s sort of a lonely life. I hope that he will remain himself and that he can deal with the celebrity status.”

Hilary Clinton’s vice presidential pick also added, “I was driving with Anne one day with the kids and I remember thinking, ‘Geez, what if I win and then I run for governor and win? This is nine years now that I’m laying out, and at the end of nine years Nat’s going to be in college. Woody will be a year away from college. Annella will be in high school. I’ve already missed an awful lot of time with them.” Thankfully, his wife Anne Holton convinced him that he could do both and the rest, as they say, is history!
Sources:
http://goo.gl/AKT86w
http://goo.gl/ZJZrDM
http://goo.gl/BaCF3D