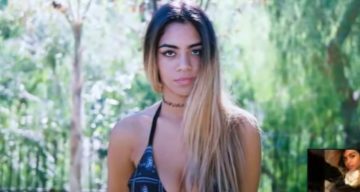 Taylor Giavasis often shocks people with her tweets, but she is a young woman with a mind of her own. Whether it is convincing girls to be less self-conscious about their bodies or humanizing womanhood, Giavasis has her heart in the right place. Though she started out being known as Nash Grier’s girlfriend, she has made a name for herself on her own.

One of the byproducts of the social media revolution is that it has made many people celebrities, virtually overnight. Taylor Giavasis is a perfect example. She was initially known as Nash Grier’s girlfriend when the Internet was full of rumors that the two had gotten engaged, after she was spotted wearing a big diamond ring on her finger. It turned out that Giavasis was given the ring by her mother, not Grier. But boy, did people become curious about her! Here are some details from Taylor Giavasis’ wiki.

Born on August 10, 1997, in Ohio, Taylor Giavasis’ age is 19. She started dating Nash Grier in 2015, when she was just 17 years old. Giavasis first joined Twitter in October 2011, first tweeting, “Lesson learned: Think before you do.” She has over 100k Twitter followers so far, and that number are likely to increase.

The Body is a Beautiful Thing

The year 2015 is also when Giavasis started her popular (but controversial) project, The Naked Diaries, where she invited girls to share pictures of their bodies on an Instagram account so that they can learn to love the way they look. Giavasis says that the pictures are free from any beauty enhancement and show the female body as it really is, without editing imperfections. The idea came to her when she was with a friend who was self-conscious about her body. Giavasis said, “So I was like, ‘Let me just take pictures of you to show you,’ and she let me, and she loved how they looked. She was so happy with them, so I was like, ‘Why don’t I do this for other girls?’”

This was how The Naked Diaries was born, and it has been a success right from its inception. Many girls have posted their photos on this Instagram account and are inspiring others to love themselves. Today, the account has more than 12k followers and is growing every day! About the future of The Naked Diaries, Giavasis says, “I want to make a book, actually. Gather women’s stories and have them say whatever they want to say to the world. The photos are powerful, but it’s the stories that make it so much more real. Everyone can relate in some way.”

There is no information on Taylor Giavasis’ net worth, but she is an independent young woman who is still starting out. She posts things as they are, like the time she posted her period blood on Twitter, which got a lot of attention from her fans from all over the world. But her heart is in the right place as she strives hard to bring out the insecurities and fears of young girls. No wonder Giavasis has more than 170k followers on her Instagram account!

Art Has No Boundaries

Giavasis also has a YouTube channel with 1,800 followers, where she posts about herself and her daily life. People want to see Taylor Giavasis’ hot pics, a lot of which can be found on her Instagram which is full of her photography, as well as her relaxing on vacation. She is an artist and photographer, who believes that art has no boundaries and that the woman’s body is beautiful in all forms. Love her or hate her, but you cannot just ignore Taylor Giavasis!