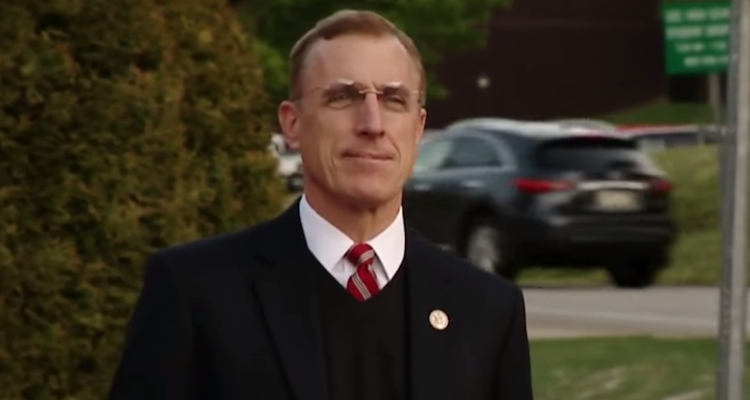 While Scandal‘s season 7 premiere isn’t until October 5, it seems there’s a real-life scandal that a certain congressman may need help fixing. Pennsylvania Republican Tim Murphy has built a heavy stance against abortion but reportedly told his mistress to have one. Now, people have questions about Tim Murphy and Shannon Edwards’ past relationship and are interested in Tim Murphy’s wife. To learn more about her and her husband, here’s our Nanette Missig wiki.

Nanette Missig’s age is unknown but she’s estimated to be in her 60s, much like her 65-year-old husband. Despite Murphy’s public profile as an eighth term congressman and practicing psychologist, his wife has lead a private life and there are limited pictures of her online. She and Murphy do share an adult daughter named Bevin, but there’s also no record of Nanette Missig’s wedding news.

Murphy Had an Affair

In September, the congressman made his affair with Edwards, 32, public after the Pittsburgh Post-Gazette won a motion to unseal court documents related to Edwards’ divorce from her husband.

“Last year I became involved in an affair with a personal friend,” a statement from Murphy read. “This is nobody’s fault but my own, and I offer no excuses. To the extent that there should be any blame in this matter, it falls solely upon me.”

“I ask the media to respect the privacy of my family. They have done nothing wrong and deserve to be left alone,” he added.

Edwards has a doctoral degree and works as a forensic psychologist in Pittsburgh. Her practice is involved with the Allegheny County court system. She was married to her ex-husband, Dr. Jesse Sally, a sports medicine physician. Murphy filed an appeal to have the divorce recordings sealed, since the affair was stated on record, but the judge denied it and allowed the information to be public record.

Did Murphy Demand an Abortion?

The congressman-mistress-abortion scandal was bad enough, but then everyone found out that that Murphy and his beliefs on abortion were nothing more than hypocrisy.

“I proudly sponsored and voted for this important bill to clearly stand for the dignity and value of all human life, both the born and the unborn,” said Murphy. “Passage of H.R. 7 in the wake of the President’s executive action gives me great hope we will once again be a nation committed to honoring life and ensuring American taxpayer dollars are never spent to end a life before it even begins.”

After many posts on anti-abortion, which is the foundation of Murphy’s political career, Edwards replied to the congressman in texts, which eventually went public.

“And you have zero issue posting your pro-life stance all over the place when you had no issue asking me to abort our unborn child just last week when we thought that was one of the options,” Edwards wrote to Murphy.

Murphy replied, saying “I get what you say about my March for life messages. I’ve never written them. Staff does them. I read them and winced. I told staff don’t write any more. I will.”

According to reports, it turned out Edwards wasn’t actually pregnant, though she has not made a statement regarding the false news. There hasn’t been any further comment from Murphy, Edwards or Missig, but they are still believed to be married.