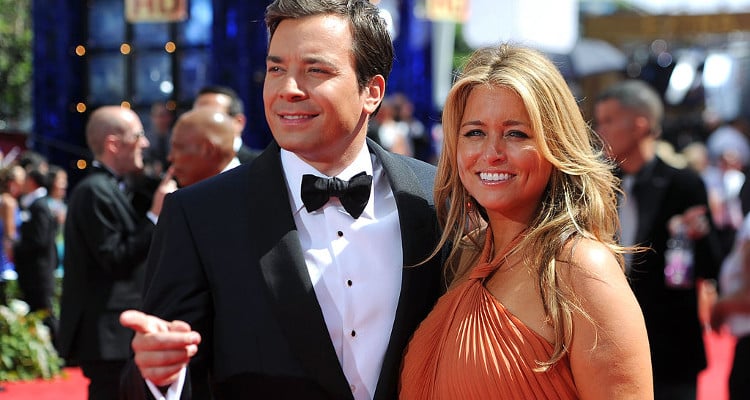 Jimmy Fallon has come a long way from SNL to stepping into Jay Leno’s shoes as host of The Tonight Show. So, while filming in studios has been suspended amid the COVID-19 outbreak, Fallon is broadcasting an improvised version of his show from his home with the help of his wife and kids. The late-night show host recently quipped that he and his wife, Nancy Juvonen, are bonding while spending self-isolation time together. They have grappled with speculations of divorce for years but are still going strong. Now that Fallon and Juvonen have reaffirmed that they “actually like each other,” it’s worth noting that Juvonen is quite the phenomenal woman with her own accomplishments. Our Nancy Juvonen wiki highlights the woman behind the late-night personality.

Nancy Juvonen was born on May 18, 1967 in Marin County, California. She is one of two kids and the only daughter of William H. Juvonen and Karen Coleman Juvonen.

Nancy and Jim Juvonen’s father, William “Bill” Juvonen, was a Stanford graduate who went on to join the U.S. Marines. After working as a marine aviator, he was an executive in the corporate aviation industry.

Why do they look like the most adorable couple ever?!?😍 #jimmyfallon #nancyjuvonen #couplegoals #cuties

Nancy and Jim probably heard a lot of stories from their father’s eventful career. For instance, in 1961, when he was training as a fleet replacement pilot for the VMF 334, he experienced wing failure and had to eject from his plane!

Fallon commemorated his father-in-law’s brush with death on the event’s anniversary in 2015. He presented Bill with a Martin Baker watch on The Tonight Show. Martin Baker was the manufacturer of his ejection seat.

Bill passed away in December 2018. He is survived by his wife, two children, and their respective spouses and kids.

Nancy Juvonen should not be mistaken for a late-night show spouse with no career. Even before she met Jimmy Fallon, she had an impressive resume.

After graduating from Marin Academy in 1985, she studied sociology and cooperative education. She went on to try out different jobs, including working at a dude ranch in Wyoming, at a mortgage firm, and as a flight attendant. She was also an assistant to the late saxophone player, Clarence Clemons.

Her brother, Jim, is also a writer and producer who worked on the set of Drew Barrymore’s Mad Love. He introduced her to Nancy, and the ladies would form a long-lasting partnership.

Posted by The Movie Music Spotlight on Thursday, September 11, 2014

Barrymore, Juvonen, and their associate, Kim Greitzer, educated themselves on the producing business to found Flower Films, which is known as Drew Barrymore’s production house. Juvonen, through Flower Films, is behind most of Barrymore’s starring films and TV shows, like Never Been Kissed, Charlie’s Angels and its sequel, 50 First Dates, Fever Pitch, Donnie Darko, Santa Clarita Diet, and more. She even produced the Charlie’s Angels TV reboot and the 2019 movie.

How many couples can say Drew Barrymore played matchmaker for them? Jimmy Fallon and Nancy Juvonen can!

Juvonen was already Barrymore’s business partner when she starred in Fever Pitch in 2005 with Jimmy Fallon. Barrymore threw a party for Juvonen and invited Fallon, where he met his future wife for the first time.

They developed mutual crushes on each other, dated, and took it to the next step. Fallon proposed to Juvonen, who is seven years his senior, in August 2007 after only four months of dating.

The proposal took place on the dock of Juvonen’s family estate in New Hampshire. It was picture perfect with the sun setting on the lake behind them, and a Neil Lane engagement ring in his hand. The couple were married three months later in a private ceremony on Necker Island in the Caribbean.

Fallon and Juvonen Have Two Kids Via Surrogacy

Fallon and Juvonen have two children, both born via gestational surrogacy. Their eldest daughter, Winnie Rose, was born in 2013 and their youngest girl, Frances Cole Fallon, was born in 2014.

For both children, the couple had kept their plans a secret. After five years of trying to have children, neither wanted to get their hopes up, should something go wrong.