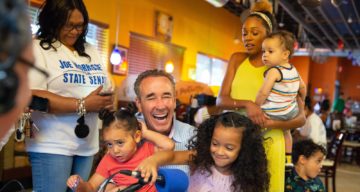 Joe Morrissey is congratulated on winning the primary vote by his wife, Myrna (top right) and children, Bella, Kennedy, Chase and Maverick, at Plaza Mexico Mexican Restaurant in Petersburg, VA on June 11, 2019. (Photo by Parker Michels-Boyce for The Washington Post via Getty Images)

Joe Morrissey is set to make a grand political comeback after winning the state Senate seat for Virginia’s District 16 on Tuesday (November 5). It appears this controversial figure is unstoppable, despite his relationship with a minor woman and subsequent conviction for it. Myrna Pride, the woman at the heart of his controversy, has stuck by her now-husband and is enthusiastically supporting his political career. But their relationship still raises a few eyebrows, and it’s not because of their almost four-decade age gap. If you missed Morrissey’s sex scandal saga, our Myrna Pride wiki will get you up to date.

Myrna Pride Met Joe Morrissey When She Was 17

According to court documents, Myrna Pride was born on March 20, 1996 to Coleman Pride and Deidre Warren. She has a sister, Deidra Pearson, who’s about a decade older than her.

Then a Virginia House delegate, Joe Morrissey met Pride, who would’ve been 17 and a few months at that time, at the Richmond Foot and Ankle Center. Pride had been working there as a receptionist, as testified by an employee there.

Pride’s co-workers said in the court documents that Morrissey would often show up and ask for Pride. One even claimed to have overheard the two discussing Pride’s impending high school graduation, then set for August 2013.

Her colleague and her sister Pearson cautioned Pride about her flirtatious relationship with the now-disbarred lawyer who is around 39 years her senior.

Deidra Pearson said that in 2013, Pride and their mother had moved into her house when a fire had damaged Warren’s home. Pearson was also supporting her sister financially at that time.

In August 2013, Pride began working as a receptionist at Morrissey’s law firm. Some reports state that she was an intern there and also Morrissey’s secretary.

After Pride began working there, Pearson became concerned for her “naive young sister” when she noticed that Morrissey regularly sent Pride texts after hours and she would stay out late with him. Pride’s friend further confirmed to Pearson that Pride and Morrissey had exchanged sexually explicit texts.

After monitoring her texts for a while, Pearson discreetly followed her sister and discovered her on a date with Morrissey. Pride and Morrissey eventually left for the attorney’s residence, at which point Pearson called their father for help.

Coleman Pride called the cops to Morrissey’s residence to get his teenaged daughter out of the home. A county court ordered an investigation into improper sexual relations between Morrissey and the then-underaged girl.

Both Myrna and mother Warren denied any impropriety. However, Coleman and Pearson accused Morrissey of preying on Myrna.

Morrissey was charged with multiple felonies, including those related to possessing a nude picture of Pride that he shared with a friend. He initially denied the charges, taking shots at Coleman and the special prosecutor among many things, and refused to resign from the House of Delegates.

However, the evidence was stacked against him and he decided to enter an Alford plea to one misdemeanor charge while maintaining his innocence. He served an active three-month sentence, while still maintaining his status in Richmond politics.

Pride and Morrissey Have a Child Together

In 2015, amid the continuous legal aftermath of Morrissey’s Alford plea bargain, Pride gave birth to a boy named Chase. The father of the baby initially was not identified. But Pride and Morrissey did release a photograph of them with Chase, featuring the trio dressed in vintage costumes.

Morrissey has released his family album in full resolution. pic.twitter.com/xHQfjaffpQ

Then, in 2015, Morrissey held a press conference where he admitted he was Chase’s father. He also addressed other false rumors that day, saying that he had four children, two of whom are biracial, by four different women.

Both Morrissey and Pride also said at the time that they didn’t have sexual relations until she was legally an adult.

They tied the knot the following year, on June 11, 2016, in Varina, Virginia. They currently have three children, including Chase. Morrissey has seven children in all—Bella, Kennedy, and Maverick as well as Chase and three more.

In 2019, Morrissey began campaigning for a state Senate seat from Virginia’s 16th district. Pride supported him throughout the campaign, saying her husband is a tenacious candidate who will fight for the people.

Pride’s Mother Was Tried for Perjury

When Morrissey entered an Alford plea, a pile of documents was produced that led to Deidre Warren being indicted on perjury and forgery charges. The charges pertained to an old agreement between Warren and Coleman regarding child support.

The agreement stated that Coleman was supposed to pay into a bank account set aside for the college costs of their children. However, when Myrna and Warren didn’t find any money in the account, Myrna had sought legal advice from Morrissey—on that night in August 2013 when Coleman had called the cops on the lawyer.

Warren was later found not guilty of the charges.

Myrna is currently estranged from her father and sister, but hopes to reconcile with them in the future. Meanwhile, Coleman was urging voters not to elect Joe Morrissey, saying the disbarred attorney “preyed” on his daughter when she was a teen. He claims to have not spoken to Myrna for over four years and that he has no relationship with his grandchildren.