Mya Lynn Lesnar is proving she has her father’s agility and skill. While Brock Lesnar’s only daughter isn’t going in the ring anytime soon, she has obviously inherited his athletic prowess. The WWE champ prefers to keep his family out of the spotlight and protect the privacy of his children. But his daughter shines for her own capabilities. Our Mya Lynn Lesnar wiki reveals more on this second-generation famous athlete.

McClain resides in Cleveland, Ohio. She is a fitness model and contributor to hunting magazines and TV shows.

Brock Lesnar is currently married to fellow WWE performer, Sable, aka Rena Greek. The RAW star and Greek have two sons, Turk (born 2009) and Duke (born 2010). Greek also has a daughter from a previous relationship. 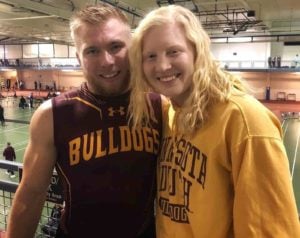 While Lesnar and Greek currently reside on a farm in Canada, their previous residence was in Minnesota. That kept Brock in close proximity with Mya and Luke, who grew up in Alexandria, Minnesota.

Before she was 18, Mya Lesnar was gaining attention for her athletic prowess at Alexandria High School. While all of Brock’s sons play ice hockey, Mya is a remarkable track and field athlete.

Mya competed in shotput and discus throwing for three years in high school. A Minnesota State Champion, she is ranked sixth among the best shot-putters in the country currently. Along with a volleyball player at her school, she is counted among the star athletes in Alexandria.

It was this talent that earned her a spot in the Arizona State University sports program before she graduated high school. Mya Lesnar is set to play for the Sun Devils track and field/cross country team and, who knows, maybe win a medal or two for the U.S. in the future?

Mya Lesnar is a Minnesota state champion, the sixth-best shot-putter in the country and a future Sun Devil!