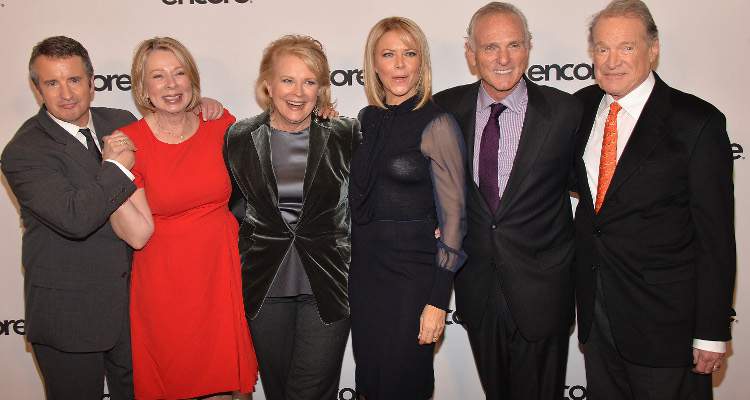 ‘Tis the season of TV show reboots! Beloved sitcom, Murphy Brown is the next in line to hit our screens! Reports also say that some of the original cast members of Murphy Brown are set to make a comeback! Where is the Murphy Brown cast now? We’ve got everything you need to know about the Murphy Brown revival, right here!

A sparkling new installment of Murphy Brown will grace our screens later this year! After CBS announced the return of Murphy Brown, fans of the show just can’t contain their excitement.

The show’s executive producer and writer, Dianne English will return to script a 13-episode series. Candice Bergen is also set to reprise her role as FYI’s star reporter in the Murphy Brown reboot.

The show was a perfect satire of the political climate at that time, and fans loved hard-hitting news reporter and her medley of colleagues. Who starred in the original Murphy Brown series, and where are they now? We’ve got all the details for you!

Somehow randomly ended up watching ‘best of’ snippets of #murphybrown on YouTube late last night – it was just soooo good – and this morning I read it’s being revived. A bit spooky but Such great news! We need Murphy (and especially @bergenbags) in our lives now more than ever… just think what she’s going to say about Trump?! #geniustelevision #takenoprisoners #murphyisback

With her tough-as-nails stance and easygoing style, Murphy Brown enthralled fans for a whole decade, and now she’s back!

Candice Bergen perfectly embodied the leading role. The actress won several Emmy Awards for her portrayal of the iconic news reporter. In 1992, the character of Murphy Brown was even mentioned in a speech by Vice President Dan Quayle, who criticized her for being a single mom.

After the series ended, Bergen went on to host a talk show and appear in the 2000 movie, Miss Congeniality. She has also appeared on TV shows like Boston Legal.

Bergen is now 71 years old and has been married to Marshall Rose since 2000. She has a daughter, Chloe from a previous marriage.

Shittiest week ever and then today I find out that “Murphy Brown” is coming back for 13 episodes. Murphy Brown was one of the reasons I wanted to be a journalist (though the world was one of the reasons I quit journalism.) So happy to see one of my favorite shows and favorite actress return to television! . . #murphybrown #murphy #cbs #returningtvshows #lovethisshow #FYI #cantwait #happiness #journalism #candicebergen #dianeenglish #somanyemmys #sohappy #goldenageoftelevision @murphybrownpod @bergenbags

Charles Kimbrough’s portrayal of the staid veteran anchor Jim Dial was legendary! The always well-dressed anchor also reminisced about the old glory days and referred to Murphy as “slugger.”

The 81-year-old actor appeared in many movies and TV shows, and even did some stage performances following the show’s finale..

Murphy Brown’s best friend on the show—and the only person who called her “Murph”—was fellow reporter, Frank Fontana. He was highly competitive, but insecure and was shown going through psychotherapy in several episodes.

Joe Regalbuto went on to direct a few Murphy Brown episodes before appearing on TV shows like Ally McBeal, Side Order of Life, and Castle.

He also directed TV shows like George Lopez and Hot in Cleveland. The 68-year-old actor is married with three children.

Miles Silverberg was the young and inexperienced, Harvard-educated executive producer who Murphy picked on with her lightning wit.

Grant Shaud was on nine of the 10 seasons of Murphy Brown. He went on to act on TV shows like Oliver Beene and Younger.

The character of Corky Sherwood was introduced as Murphy’s replacement during her rehab stint, but was kept on the show even after the reporter’s return and given fluff topics to report on.

Faith Ford amazingly portrayed the chirpy Corky Sherwood, a former Miss America from a small town in Louisiana. She went on to appear on the show Hope & Faith as well as movies like Pacific Rim and Prom.

The 53-year-old actress has been married to Campion Murphy since 1998.

The roles, played by Pat Corley and Robert Pastorelli respectively, have a fan following of their own! Since the show last aired, both of these actors have passed away; 49-year-old Pastorelli died of a drug overdose in 2004, and Corley passed away in 2006 at the age of 76 of congenital heart failure.

Fans may also remember Lily Tomlin, who joined the show in the last season, as producer Kay Carter-Shepley, and Murphy’s love interest, Jerry Gold, played by Jay Thomas, who passed away after a battle with cancer in August 2017.

While only Candice Bergen’s return is certain for now, we hope the other members of the amazing cast will also make a comeback for the Murphy Brown revival. The new Murphy Brown show is scheduled to hit screens during CBS’ 2018-19 season.