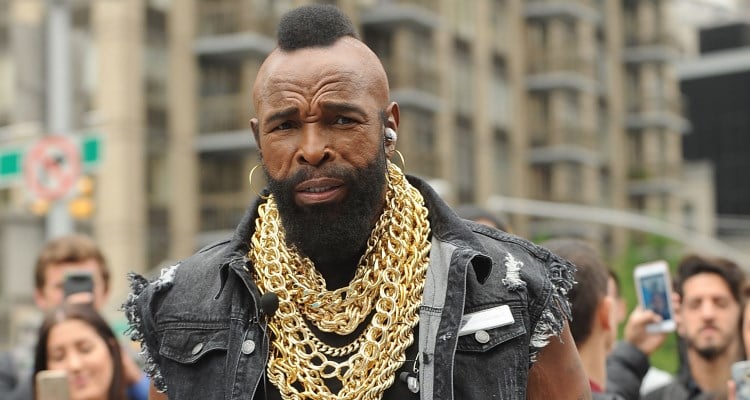 Mr. T and Kym Herjavec are on Dancing with the Stars, and you’ll love how amped the former actor and professional wrestler looks ahead of the competition! For the show’s 24th season, Mr. T will be joining the rest of the Dancing with the Stars cast to fight for the winning spot, and win the hearts of Americans.

Mr. T and Kym Herjavec’s performance is one you won’t want to miss on the premiere of Dancing with the Stars season 24! He took to Twitter saying, “This Dancing is really making Me Sweat off the Lbs. I’ve already lost 12! I am Lean, Mean, and 219. I am Agile, Mobile and Hostile. Grrr!” The actor isn’t worried about the competition, saying he believes the show is designed so that the audience can see a different side of celebrities. After turning down the role about five times, he decided this time he was ready for it. Alongside his professional ballroom dancer coach, Kym Herjavec, Dancing with the Stars will be a whole new adventure for the iconic star. If you want to know more about Mr. T on DWTS, keep reading!

Competing for the Kids

According to the Chicago Sun, Mr. T is a cancer survivor and plans to use the competition to boost two causes that are close to his heart: The St. Jude’s Children’s Research Hospital, and Shriners Hospitals for Children. He told the site, “My thing is to hopefully inspire the kids who have been suffering with cancer or anything like that.” Mr. T did not give up in his fight, and he wants young people to keep fighting too. “It’s OK if the people who watch are laughing at me or laughing with me… I’m a clown. I know how to put on a good show. I’m going to do my best.” Mr. T on Dancing with the Stars will make this season extra special, that’s for sure!

With his talented Australian dance partner, DTWS’ Kym Herjavec, he hopes to dance the tango because it reminds him of his mother. She would tell him when he was getting in fights as a kid, “It takes two to tango,” meaning it takes two people to start a fight. Mr. T has already picked his song—he and his dance coach will pump out a routine to the theme song from his very own 1980s action television show, The A-Team.

We need some help with a Team name! Any suggestions?!

Love on the Dance Floor

Kym Herjavec is back on the dance floor once again, but this time she will be taking on a new partner! The dancer married her Dancing with the Stars 2015 partner, Robert Herjavec and after that season, Kym left the show. Now, she is excited to dance alongside Mr. T, as she told ET, “When they told me [my partner] was Mr. T, I was like, ‘You know what? How can I resist that?’” She also joked with the wrestler about being respectful to each other while on the show, or else her husband might have to “get involved.”

I'm so excited to announce I'm back in the ballroom @dancingabc with the legendary Mr T ? I'm beyond excited

We “Pity the fool” who thinks Mr. T will go down this season of DWTS! He is geared up and ready to dance the night away! Tune into the 400th episode and season 24 premiere of DWTS on March 20 at 8:00 p.m. EST. If you want to show support for the pair during the season, send out a tweet to @MrT and spread the love! With the episode quickly approaching, Mr. T is ready to entertain and make you smile. “Now my Dance Steps won’t be Pretty. But I hope I Entertain You and make You Smile…” he quipped!