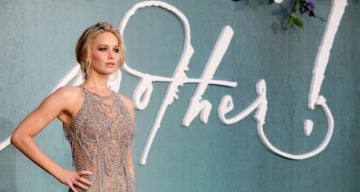 The Toronto International Film Festival is over but that doesn’t mean movie buffs aren’t still talking about the best films of the festival! The legendary festival is known for showing movies that eventually move on to win Oscars, and now fans want to know more about one movie in particular. What is Mother! about? Keep reading if you need Mother!, the movie, explained.

What Does the Movie, Mother! Mean?

Directed and written by Darren Aronofsky, Mother! is about a woman (Jennifer Lawrence) and her much older husband (Javier Bardem), who works as a poet and can’t get over his writer’s block. They live in an old house with a circular layout, in a field, with nothing but trees surrounding them. While the husband paces around, his wife restores the old house and seemingly has a natural connection to it. Then one day, a stranger (Ed Harris) comes to the front door and stays over, despite Lawrence’s character’s reluctance to let him in. The following day, the stranger’s wife (Michelle Pfeiffer) arrives. The visitors invade the couple’s lives, asking personal questions about the poet and his wife while making themselves very welcome. Then the strangers’ two feuding sons (real-life siblings Brian and Domnall Gleeson) drop in and immediately start fighting. The poet’s wife is upset and wants the family to leave, but the family has other plans.

The Meaning Behind the Movie, Mother!

If you need a review of Mother! before you decide to see the film, then you came to the right place—but beware of spoilers! At its core, Mother! is an allegory for “The Creation” and draws its inspiration from the Bible. The home is comparable to the garden of Eden and the poet and his wife are like Adam and Eve. Many will pick up on the feuding brothers as the infamous siblings Cain and Abel (which didn’t end well) and the home itself needs to be purged with some kind of apocalypse to restore order. The question is, what kind of horror will help restore balance? Mother! is about creativity, creation, and destruction and it’s the psychological thriller that only Aronofsky can pull off! The film takes you on an emotional and terrifying roller coaster ride and we can see why Lawrence immediately said “yes” when asked to join the cast!

Pfeiffer’s character can be described as the serpent of temptation, but also partly Eve, while Lawrence’s character can be compared to the mother of all creation (like Gaia in Greek mythology). She’s a fighter who won’t allow anyone to disturb what she worked so hard to build. Like most creation stories, there’s a bit of violence needed to help rid the world of evil and even in today’s climate, many are drawing their own apocalyptic signs from the Bible. Mother! is a film worth seeing and you may need to watch it again in order to catch some of the other subtle metaphors. Mother! is already in theaters and it definitely has Oscar and Golden Globe potential written all over it. As if Lawrence needed any more awards!

It’s already looking to be one of the best horror flicks of the season, and though the preview gives just enough away for us to want to run to the theatres to see it, it also stirs up a lot of questions! Darren Aronofsky’s name as director is enough to cause fans to flock to the cinema for this one! (He was behind hits like The Black Swan and Requiem for a Dream!) But don’t take our word for it, check the trailer out below and see for yourself!