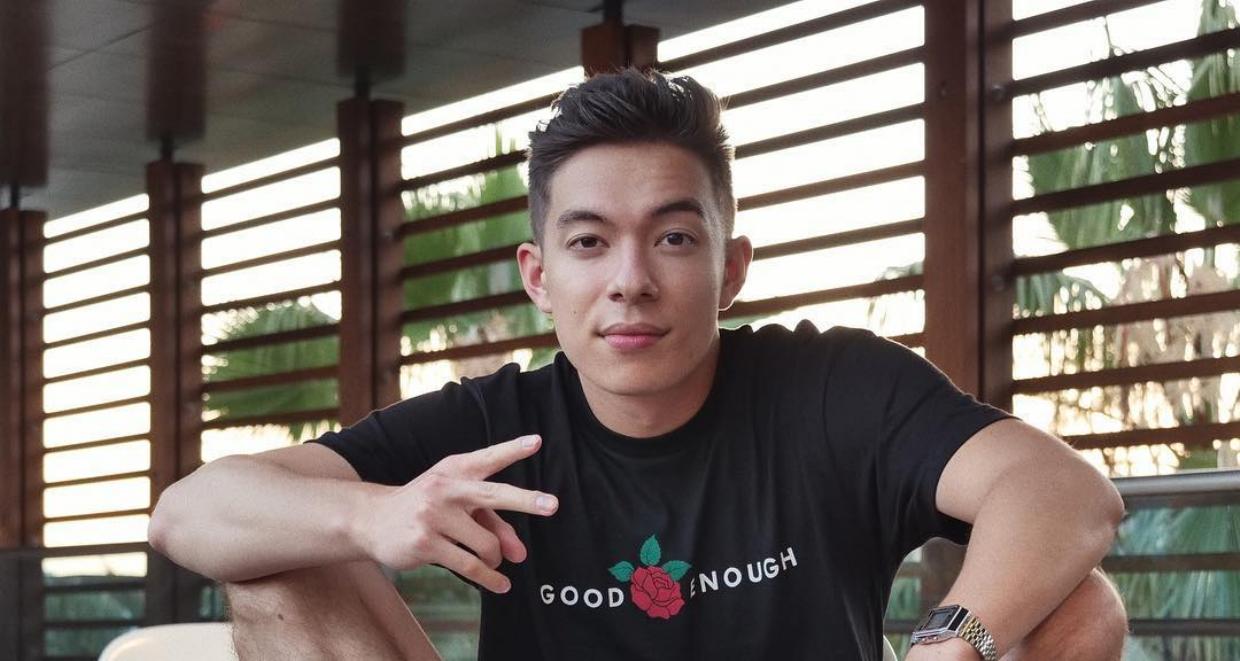 Motoki Maxted, better known as simply “Moretoki,” became a viral sensation after posting his lip-syncing videos online. His hilarious expressions and his ability to dance/lip sync to pretty much any musical hit made him a hit and he began posting regular videos to YouTube. His fanbase exploded and he was a YouTube success, but it all came crashing down for him personally, forcing him to remove himself from the social media platform. Recently, he explained why he was away from social media and filled in his fans on where he’s at now. Learn more with details from Moretoki’s wiki.

Born on December 3, 1996, Moretoki’s age is 21. Hailing from Akron, Ohio, he has lived in Japan for three years but currently lives in Los Angeles, California.

Moretoki’s real name is Motoki Maxted. He was nicknamed “Mojo” because a lot of people found it hard to pronounce Motoki. The name “Moretoki” is the name he gave his second YouTube channel, and he became known to many as simply that. It was a sort of “play on words” meaning “More” of Motoki.

He graduated from Wauseon High School with a GPA of 3.9. Motoki then studied at Loyola Marymount University to pursue a Bachelor of Arts degree in Film and Television Production. Additionally, he was involved with the university’s TV station while creating his own content.

Motoki has learned to speak Spanish and is fluent in Japanese.

Motoki Maxted was born to a Japanese mother named Kumi Maxted. His father, Mitch Maxted, is an American.

Mitch Maxted is from Marshalltown, Iowa, and he has studied Greek at Lexington Theological Seminary. He is currently a pastor at Round Rock Christian Church in Texas.

You may have seen Moretoki’s sister, Manami Maxted, as she had appeared in one of his videos when they did the “Smoothie Challenge.”

According to Manami’s Instagram, she is an existential illustrator who loves theatre and is a huge fan of comics. She is from Wauseon, Ohio and currently works as a gallery assistant at the Blanton Museum of Art in Texas.

Moretoki’s brother is named Kajot Maxted. He is fluent in English and Japanese.

Moretoki’s Mother Has Appeared in a Lot of His Videos

Many people wonder why Motoki’s mother doesn’t smile or laugh in his videos, but that’s because he actually asks her not to. (It’s way funnier that way!) And a lot of his car ride videos include his mother driving him around with a straight face while Motoki “acts a fool,” lip-syncing while she drives. It’s hysterical.

His video, Another Car Ride with Motoki, earned Moretoki around 12.0 million views, mainly because of his mother’s straight face! Most of the videos with his mother have earned him decent views on his channel.

Moretoki normally posts funny videos about relationships and other daily struggles. He is famous for the comedic faces he makes during his car rides, where he dances to various songs.

Zach Piona enticed Moretoki to make his first car ride video. He has been obsessed with making videos at a very young age. He and his siblings would do skits when they were small.

Moretoki has been lip-syncing for many years now. He stumbled across YouTube when he was 10 years old and loved watching videos. He remembers lip-syncing and dancing to the Numa Numa dance video for several months because he found it quite entertaining. 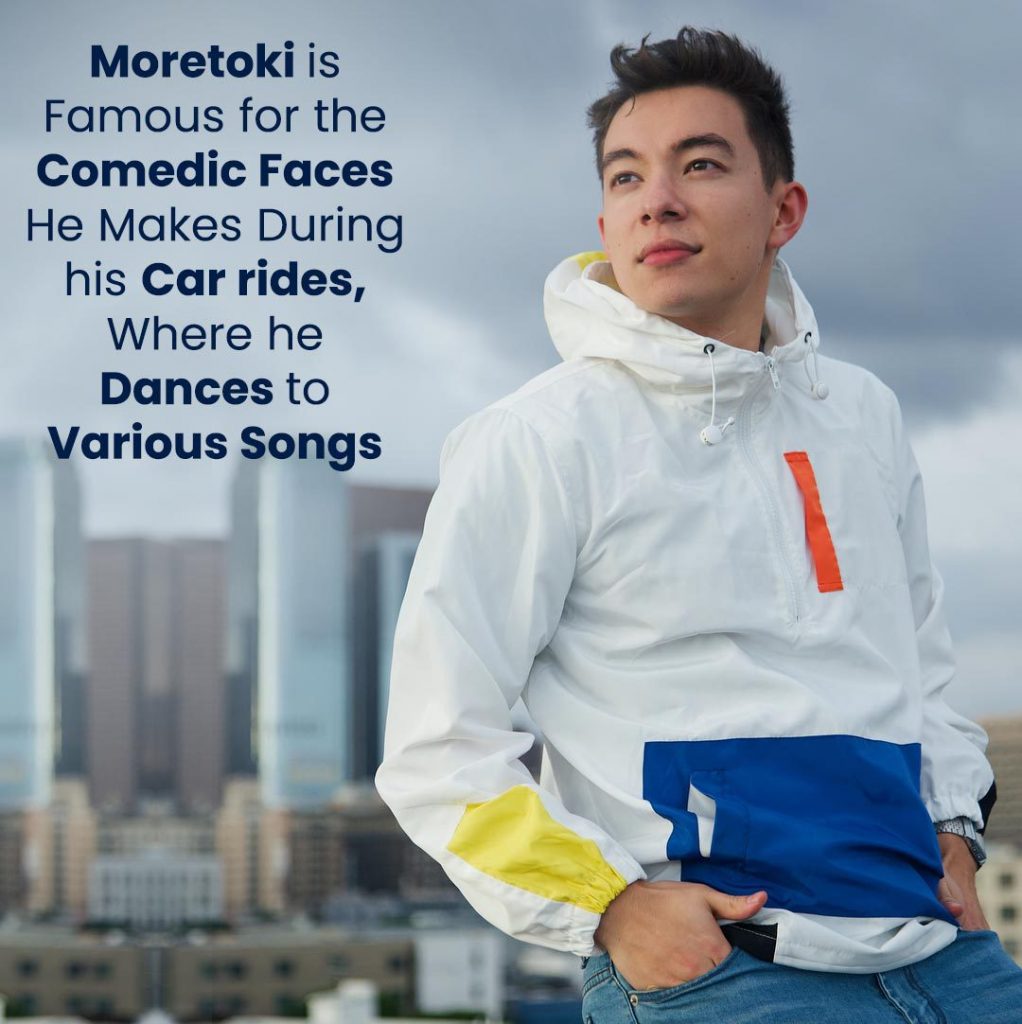 He didn’t have an account on YouTube at the time because you need to be 13 years old to have one, according to the guidelines. But that didn’t stop Motoki from making videos and made his first one on DVD when he was 10.

When he was in high school, Motoki started uploading videos on YouTube, which he would film for his Spanish and English classes. He eventually started uploading unrelated school videos, and within a year or two, he had over 100K subscribers!

Motoki’s skits and relationship videos received a lot of likes. But, then he began to feel pressured to make entertaining and funny videos so that viewers would come back and subscribe to his channel. So, he decided to start a new YouTube channel, and that is when “Moretoki” was born.

His new channel, Moretoki, featured more videos of him and ended up becoming bigger than his previous one! He also started to really enjoy making videos. 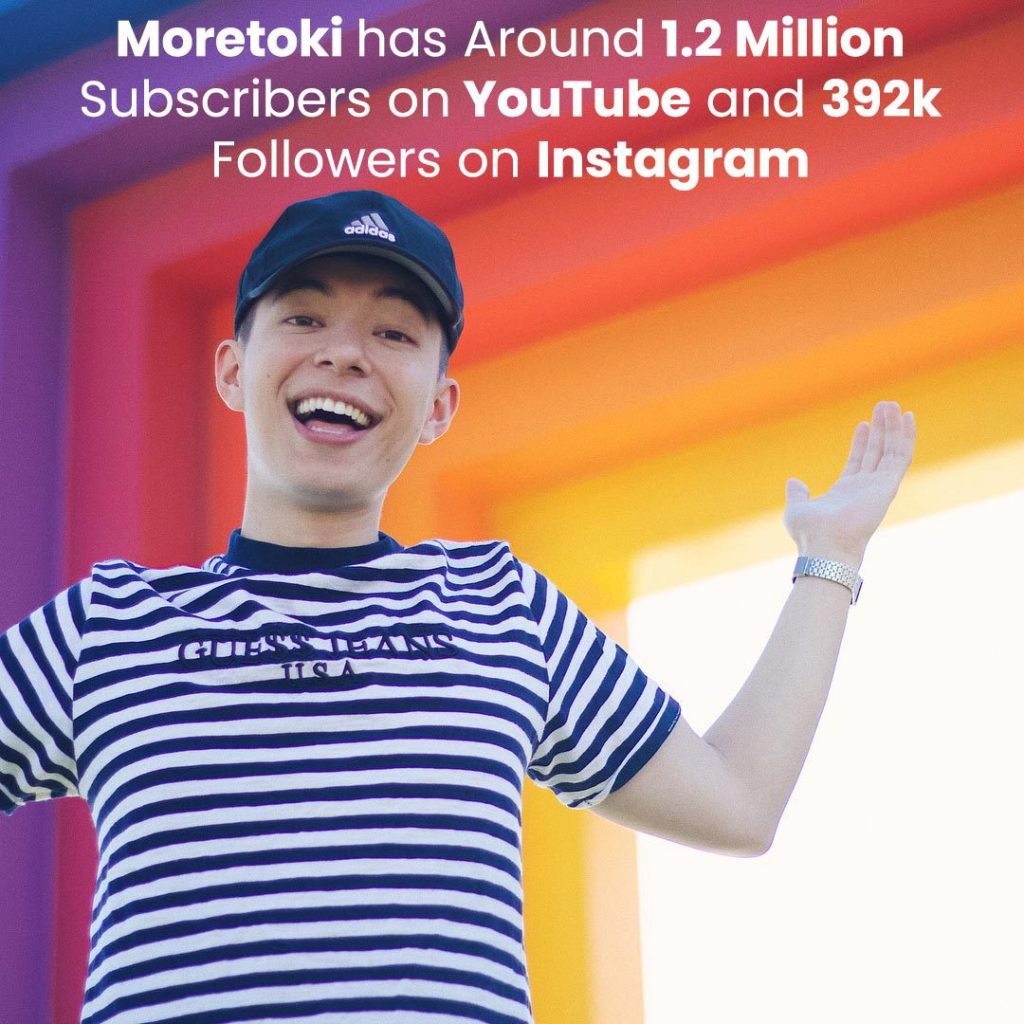 Almost all of Moretoki’s videos end with him busting a move. And he can imitate characters and actors very well.

How Does He Shoot His Car Rides Video?

It is entertaining and fun to watch Moretoki’s car videos. The day before he shoots the video, the YouTuber listens to the songs he will be dancing to in the car on repeat.

It gets a little awkward for him when people see him making his videos and funny faces. Filming becomes stressful at times for Motoki and his mother, as they are simply roaming around in the car. But as his follower count grew, so did the pressure on Motoki to make perfect, hilarious videos. He would even scrap half of them because he felt they weren’t good enough. Soon, the pressue began to boil over.

Moretoki on What Just Happened?

The about section of the page reads, “In this era of multi-tasking, people pay attention for less time than a goldfish! So now, we’re taking unsuspecting people by surprise to win some cash. Will you be able to pay attention, or be too distracted to keep track of WHAT JUST HAPPENED?”

The last episode was aired six months back.

It has been six months since Moretoki last uploaded a video.

He started posting less of videos as more people started watching them because he felt pressured to post good content. Although he is grateful to his followers, the tremendous amount of stress as a social media influencer got to him.

Moretoki’s anxiety and stress turned into depression. Then there came a point when he didn’t know what to do with his life. Althought he did shoot a lot of videos, he would always find a reason not to upload them on YouTube. That’s when he realized he was depressed, and decided to take a break from social media. But fans were left confused and worried about what had happened to him.

In a recent YouTube video, Moretoki took the time to openly explain that he took a break from social media for the last couple of months. He explained his reasons why, and even got a bit emotional about it, admitting that he began to feel depressed and just needed a break. He eventually realized that he still likes to make videos but needs to stop caring so much about what people think.

The good news for his loving fans is that Moretoki will be returning to YouTube! He is working on a podcast and will be back on our screens soon! He seems to have done some real soul-searching and has realized he needs to stop putting so much pressure on himself.

Moretoki uploaded his podcast on his other YouTube channel. The first episode is titled Exposed – Who created Orange Justice ft. Roy Purdy.

Many people think that Moretoki is gay, and was especially cast as such during his school days when he often opted for music classes and plays. However, he made it clear that even though he may look at Zac Efron and get the tinglies, he is straight. He also explained that he doesn’t offended when people question his sexuality. He’s comfortable with it!

The 21-year-old used to be in a relationship, but it looks like he is not dating anybody right now.

Motoki lived in Japan for three years when he was four years old. He had to attend school there and was teased mercilessly by a classmate who called him “skinny foreigner” on a daily basis.

He gradually felt out of place and told his teacher about it. The teacher explained to the kids that Motoki was no different and that they should not bully him.

In 2016, French YouTube star Mathieu Richard, whose channel’s name is Math Podcast, admitted to plagiarizing content from U.S. creators. One of his videos, CE QUE LES MECS AIMENT CHEZ LES FILLES (what guys like in girls) is copied from Moretoki’s video, Things Guys Like About Girls.

Motoki knew about the copied content and called Mathieu out on his behavior. He asked Mathieu to give him credit and link his channel. After ignoring him, Mathieu finally added Moretoki’s name in the description.

He also addressed the issue on his YouTube channel. In the video, Moretoki explains that Mathieu stole seven of his video ideas and even stole from other YouTube stars!

In another video, Moretoki even goes to Paris to meet Mathieu to sort things out. He not only settled things with Mathieu, but he also enjoyed exploring the city.