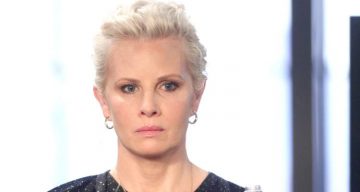 Have you shopped at a Monica Potter Home store? If so, then you might want to know more about the actress and businesswoman. Monica Potter’s net worth of $3.0 million was made through her acting career, but with the store now facing some financial dead-ends, will she lose it all? Monica Potter, as featured on CSNBC’s The Profit, has businessman and investor Marcus Lemonis helping her salvage her business

Monica Potter’s family has a business background, so it was a natural calling for her to follow that path. But passion isn’t enough. She needs the right investors, and make some changes in order to turn a profit. Find out more about Monica Potter’s salary and wealth right here.

Monica Potter was born on June 30, 1971, making her age 46. Since childhood, she knew that she wanted to become an actress. Her father was behind the first flame-resistant car wax, and her mother was a secretary in a hospital. Her grandparents were Irish immigrants who settled in the U.S., and she has three sisters.

Potter began acting in elementary school, in the Cleveland Play House. She then went to Villa Angela Academy, and graduated from Euclid High School.

While working at sandwich and flower shop as a teen, she also took up modeling, and earned oles in commercials and ad campaigns in Chicago. This taste of fame took her to Los Angeles.

There was no stopping her now, and her debut was a great achievement. Potter’s career started with The Young and the Restless in 1994. You will also recognize the star from her role alongside Nicholas Cage in Con Air. She then co-starred with Robin Williams in Patch Adams, after which she went on to do Head over Heels, followed by the thriller based on James Patterson’s bestseller, Along Came a Spider, opposite Morgan Freeman.

She was already a household name now, and worked in some big TV shows like Boston Legal, which she left in 2009, and later in the one and only season of Trust Me. The show was canceled due to low ratings, after which Potter was seen in the hit horror remake, The Last House on the Left.

Monica Potter’s role as Kristina Braverman on Parenthood earned her a Critics’ Choice Television Award for Best Drama Supporting Actress in 2013, as well as a Golden Globe nomination.

What is the Monica Potter Store?

She turned her passion for lifestyle into a business in 2014, with a home goods, skincare, and home fragrance store in Cleveland, Ohio. Monica Potter’s products began with a sea buckthorn line of essential oils, which her father used when she was a little girl.

The product is close to her heart, and once it picked up steam, she ventured into more lifestyle goods. The store houses a plethora of home goods from scented candles, to linen, and even custom curated clothing.

Still looking for unique and useful #ChristmasGifts? Our Sea Buckthorn Balm is a favorite among our customers. Use it for dry skin, eczema, psoriasis, scars, burns, and so much more! Perfect for everyone on your list ? Learn more on our website: Link in bio.

But things weren’t always hunky-dory, and the finance aspect of the business began facing troubles. When Potter appeared on Marcus Lemonis’ The Profit, it was revealed that the business was suffering a whopping $1.0 million loss, meaning she lost about $100,000 a year.

Lemonis wanted to make big changes in the way the business is run, and requested an all-access pass from her. Things turned sour, and his changes soon stopped being implemented.

Potter soon saw that her store needs his help, and she agreed to get on board with his decisions. We can only hope that they last, and see a positive change in her wealth.

Tweet with @marcuslemonis during tonight’s all new #TheProfit! See you at 10p on CNBC.