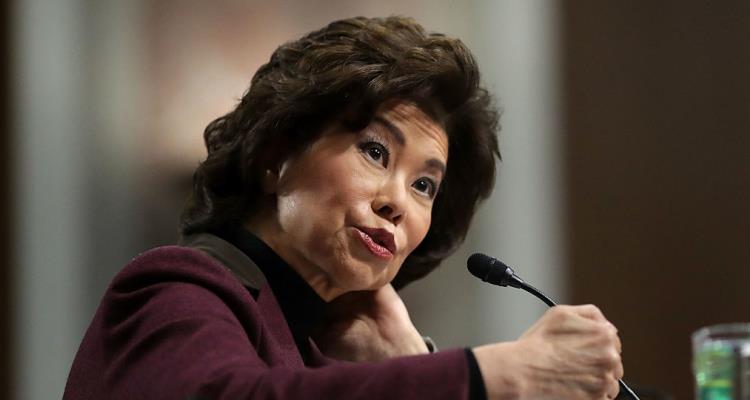 Elaine Chao,64, was born on March 23, 1953, and is the eldest daughter of Dr. James S.C. Chao and the late Mrs. Ruth Mulan Chu Chao. Elaine’s parents escaped from Shanghai to Taiwan after Communists took control over China in 1949. Her father moved to the United States nine years later and had to leave behind his wife and three of his daughters, until he could get himself established enough to sponsor them. Elaine’s mother was 27 at the time and boarded a cargo ship and a train before they reached California and then New York City.

“It took him three years before he could bring my mother and me and my two sisters,” Chao recalled to USA Today. “We lived in a one-bedroom apartment in Queens. N.Y. I didn’t get my citizenship until I was 19 years old. I didn’t speak English. None of us did, except for my father. And it was very hard in the beginning. I remember how vulnerable our community felt at the time, and I think those lessons, those experiences of being on the outside” remained with her.

“At ninth grade, I had to stay at school for lunch, and I didn’t know how to use a fork and knife,” she says. “Nobody ever taught me. We used chopsticks,” she added.

Elaine attended Harvard, where she earned her MBA and got her first job at Citicorp, long before she entered public office. Her father, now 90, lives in New York’s Westchester County.

Chao married Kentucky Senator Mitch McConnell, 75, in 1993 and they are both Republicans. Don’t expect to read anything about Elaine Chao’s children, because she doesn’t have an! Mitch has three children from his first marriage: Claire, Porter, and Elly. Mitch was born on February 20, 1942, in Sheffield, Alabama and attended the University of Louisville.

Is Mitch McConnell Getting Fired?

Once again, Trump’s Twitter fingers are moving at full speed and this time it’s McConnell he’s calling out! The president has nothing but good things to say about Chao and her job performance, but he made it clear that he’s “disappointed” in McConnell. The senator has failed to pass a health care repeal bill before the August recess, which left many wondering if McConnell was getting the ax like Anthony Scaramucci and everyone else before him.

So far, Elaine Chao’s Twitter account is business as usual and the president couldn’t be more proud of her efforts.