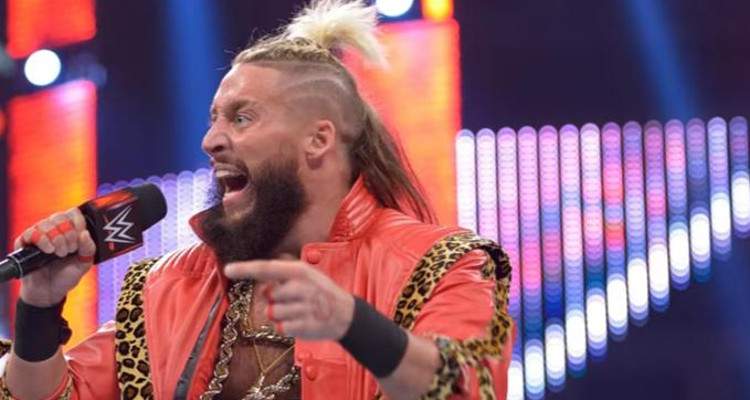 WWE pro, Enzo Amore has been suspended by the promotion after allegations of sexual assault came to light. Who is Miss Gucci Witch? Find out about Enzo Amore’s accuser here.

Eric Arndt, better known as Enzo Amore, formerly one half of the tag-team duo, Enzo and Cass and current WWE cruiserweight champion, has been suspended by WWE. Amore’s latest troubles are not kayfabe! The pro-wrestler has been accused of sexual assault leading the promotion to suspend him while the accusations are investigated. Who is Amore’s accuser? As of now, she’s known by her Twitter username, @missgucciwitch, a.k.a. Philomena.

Who Is Miss Gucci Witch?

On January 22, a Twitter user named @missgucciwitch tweeted allegations of sexual assault against WWE star, Enzo Amore. Her name hasn’t been disclosed, but she is being referred by her Twitter name, Philomena in reports. Not much is known about her except that she’s a fan of late rapper, Lil Peep.

In a tweet that is pinned to the top of her page, she writes, “OKAY..it’s been long enough & I have been so so scared to share this. I was raped in mid October by the WWE Enzo Amore (also known as Eric Arden) & Tyler Grosso & TOOPOOR let it happen as accomplices. I was in a mental hospital for 45 days after it. They ARE NOT good people. [sic]”

The tweet contains screenshots of the alleged encounter in detail. She claims to have been drugged and raped by Amore.

A rep for the police department issued a statement that read: “On Monday, October 23rd, 2017, at around 2:30 p.m., Phoenix Police responded to a local hospital for a call of a sexual assault that had reportedly occurred on October 19th, 2017 at 401 West Clarendon Avenue.”

OKAY..it’s been long enough & I have been so so scared to share this. I was raped in mid October by the WWE Enzo Amore (also known as Eric Arden) & Tyler Grosso & TOOPOOR let it happen as accomplices. I was in a mental hospital for 45 days after it. They ARE NOT good people. pic.twitter.com/VhyG6oaDwg

According to Philomena, the alleged sexual assault occurred in October 2017 in Phoenix, Arizona. Reports confirm that Amore was in Phoenix on October 18, and flew to L.A. the next night. The alleged rape occurred in a hotel room early morning of October 19.

Phoenix PD confirmed that a report was filed and the incident is under investigation. The authorities are waiting on lab results before they complete the investigation.

Philomena gave graphic details about the alleged encounter in her tweet, where she also names Tyler Grosso and Toopoor, celebrity stylists and social media personalities, as Amore’s accomplices.

She posted screenshots of private messages from Toopoor, as well. Toopoor denied the accusations in an expletive-laden Twitter rant, which has since been deleted.

Like your side of the story matters at all? You said if I wasn’t down to suck his dick we could just hang but intsead you drugged me & left me for dead. @toopoor_ pic.twitter.com/CFBfXRzpIm

Philomena has a YouTube channel with a handful of videos, but one in particular is scandalizing. In a video uploaded on January 8, she reveals that she’s 19 years old and talks about an incident when she was 17.

In the video, she mentions faking a pregnancy when her boyfriend broke up with her. The video has shocked many, especially after she brought forth the rape accusations. But she vehemently denies lying about the rape allegations.

She previously mentioned in a video that she has been sober since March 2017. Since the alleged assault, she was receiving treatment for PTSD but left the treatment early.

The storytime PRANK of me faking the pregnancy was 2 years ago. I wouldn’t lie about something like rape ever. @toopoor_ pic.twitter.com/C0okuieRBC

The incident is under investigation and we will know more as the story develops. Until then, Enzo Amore will be suspended from all activities. This comes as a major blow to WWE Raw’s struggling cruiserweight division.

WWE issued the following statement regarding Amore: “WWE has zero tolerance for matters involving sexual harassment or sexual assault. Until this matter is resolved, Eric Arndt (aka Enzo Amore) has been suspended.”