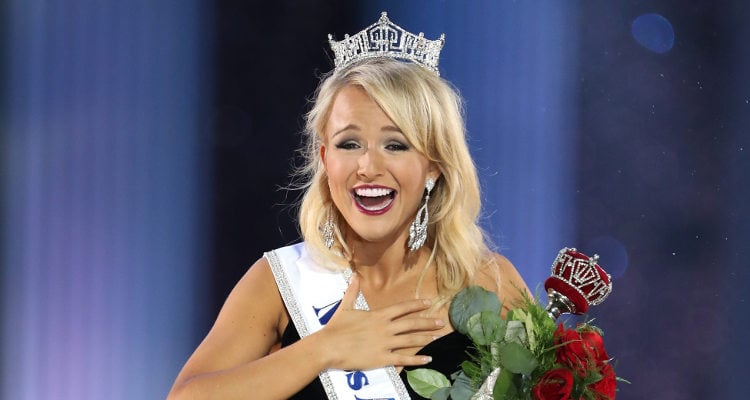 On Sunday night, a 21-year-old from Fayetteville, Arkansas made history when she won her home state the Miss America 2017 title, after 35 years. Savvy Shields was pronounced Miss America 2017 by hosts Chris Harrison and Sage Steele, after being the celebrity judges’ panel pick. The former Miss Arkansas 2016 was crowned the Miss America 2017 winner, by 2016 winner Miss Georgia Betty Cantrell, after wowing the judges with her beauty, brains, as well as her talent.

#2 She is a College Senior at the University of Arkansas

Shields is currently a college senior studying fine arts at the University of Arkansas. Her talent was a jazz dance routine performed to the single, “They Just Keep Moving the Line”, from the TV show, Smash. She won the preliminary competition and gave an impressive answer to the judges’ question on current events.

#3 She Confidently Answered the Judges’ Question

Shields was asked to give her thoughts on the 2016 Democratic presidential candidate, Hillary Clinton. The talented dancer confidently replied, “If you’re trying to be leader of the free world, everything you say and do matters. And all of your actions are held to a higher standard. And unfortunately, the media does love to sensationalize everything. It’s hard to decide what is truth and what is truly scandal. Both of the contestants have done a great job.” It’s no wonder that the judges were blown away by Shields’ answer.

Shields has dreams of becoming a backup dancer for none other than Beyonce. Hailing from Arkansas (a state in which obesity rates have increased significantly over the last decade), she has started a platform titled “Eat better, live better.” After Shields was crowned Miss Arkansas last year, she won $25,000 and post her Miss America 2017 victory, she will earn $50,000 as a scholarship fund.

#5 She Was Chosen Among 52 Contestants

Words can’t describe how happy I am for Arkansas right now! Our beautiful Miss Arkansas Savvy Shields was just crowned Miss America! Not only does she represent Arkansas but Fayetteville and the University of Arkansas!! The hogs beat #15 TCU this weekend and we are now ranked again. When I was in the middle of a sea of TCU fans cheering for my state some texas people said hey seriously how are you and the other Arkansas fans so loud? You guys just have too much spirit. Those that haven’t grown up here will never know how much our love runs deep. We have no pro teams, we are a smaller state, we live a more simple life. I may have been born in Texas but I was raised in Arkansas, in hog nation. It took me leaving Arkansas to realize how much I love it so much and will always love it. I’m truly an Arkansan and I’m celebrating with the rest of my state tonight! Yay for our new miss America! #missamerica #missarkansas #theresheis #goarkansas #savvyshields

The Miss America pageant was first held in 1921, at what is now known as the Boardwalk Hall Arena in Atlantic City. The event was broadcast live and had a celebrity panel of judges, that included the likes of Grammy-winning singer Ciara, NBA’s Dallas Mavericks owner, Mark Cuban and three-time Olympic gold medalist, Gabby Douglas.

The 52 contestants represented all 50 states of the United States, along with the District of Columbia and Puerto Rico. Miss South Carolina, Rachel Wyatt was declared as the first runner-up, while Miss New York, Camille Sims was the second runner-up. Miss Missouri, Erin O’Flaherty, made history as the first openly gay contestant to participate in the Miss America pageant.