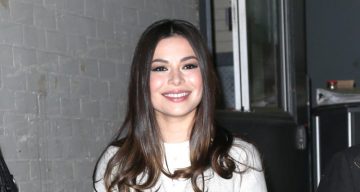 Not Sisters At All

No. Miranda Cosgrove and Lil Tay are not sisters. This confusion has been persisting because Lil Tay has been calling herself Lil Tay Cosgrove on the Internet, even though there is no relationship between the two whatsoever! Lil Tay (nobody knows her real name) even claimed that her Instagram account was managed by Miranda Cosgrove, but that is not true either. Now, Lil Tay says that her account is being managed by her mother.

Miranda, the Only Child

Miranda is the only child of her parents Chris and Tom Cosgrove, while the names of Lil Tay’s parents are not yet known. So, there is no doubt that Miranda and Lil Tay are not siblings. In fact, they’re completely unrelated.

Born on May 14, 1993, in Los Angeles, California, Miranda Cosgrove’s age is 24. She is the only child of her parents, Chris (nee Casey) and Tom Cosgrove. Cosgrove has said several times that she is of English, Irish, and French descent. So, who else makes up Miranda Cosgrove’s family?

Thinking of my grandpa today. He was a veteran. Thankful to all the people who serve our country.

William was born on April 5, 1931, in Clovis, California and graduated from Clovis High School. After moving to the Los Angeles are in the early 1950s, William joined the U.S. Army and served in Korea. After his discharge, he settled in Compton, California, where he started his own company.

William became the owner and proprietor of Casey’s Automotive in South Gate. William’s other great passion in life was good food, as he was a gourmet chef. He was a regular customer of the area’s finest restaurants and even visited small, hole-in-the-wall eating joints in his search for fine food. He passed away in his home on December 16, 2010, and left behind a treasure trove of memories for his family and Miranda.

A Strong and Independent Woman

Lois Ann Core was born in 1932 in Okemah, Oklahoma, and was married to her husband William for 60 years! She gave birth to four children namely Christina Cosgrove, William Casey Jr., Robert Casey, and Jean Casey. After raising her children, Lois started working at the age of 40 as a manager in the medical claims department of California Field Ironworkers.

Lois loved to spend her free time gardening and taking walks. She passed away at the age of 83 in Seal Beach, California, on November 21, 2015.

Father Had Own Business

Miranda Cosgrove’s mother, Chris, is a homemaker while her father, Tom, owned a dry-cleaning business. The two of them showered Miranda with love and attention right from day one. Tom’s company is called Crestmont Dry Cleaners and is situated at 2255 Foothill Boulevard, La Canada Flintridge, California.

Cosgrove’s parents sent her to school until the fifth grade, and then home schooled her from the sixth grade onward. A big reason for their decision to home school their daughter was that Cosgrove’s acting career had taken off and she had to divide her time between her work and her studies. Once again, it was her parents who made that possible.

Moving Back In with Her Parents

While most people of her age would be trying their best to stay away from their parents, Miranda Cosgrove did the very opposite! She actually decided to move back in with her parents after she left and divided her time between staying at her own place and staying at her parents’ home. But why did Cosgrove do that?

Cosgrove told People back at that time (in 2016), “I have my own place. I feel like everybody wants to find a way and get out and be independent, but for me, it was like all of a sudden I had this place that I could go live at, and I was like, ‘Oh no.’”

Cosgrove said that moving into her own place was “exciting at first” but once she settled down “it was kind of boring.” She missed her mom who used to do her laundry and she had no one to watch TV with at night. It got to her until she decided to move back into her parents’ home and stay with them a while.

In fact, when Cosgrove attended college at the University of Southern California, she split her time between her own home and her parents’ place. That’s what people call getting the best of both worlds!

Cosgrove was only three years old when a talent agent spotted her playing and having fun with her parents at a Los Angeles food festival. He handed his card to Chris and made an offer to her asking if Miranda could model. Chris was reluctant to make Miranda face the camera at such a tender age, but after checking out the modeling agency, she and Tom decided to give it a go.

Chris remembers, “Our big plan when we decided to do this was to get money for college.” Within a few weeks Miranda got her first commercial for the soft drink Mello Yello, and then there was no looking back. In the early days, Chris used to accompany Cosgrove on her tours, as she was very young and needed a guiding hand.

Soon after, he career snowballed and success came knocking. She landed her first major film role in School of Rock playing the role of the loveable Summer Hathaway. And then, Nickelodeon noticed her and iCarly was born! There’s been no looking back for this young starlet and it looks like her success in the field of entertainment is only continuing to grow!

Parents are Key to Her Success

With the security of protective and understanding parents like Chris and Tom, Miranda has carved out a healthy career for herself as an actress, singer, and songwriter. It is no wonder that Cosgrove credits Chris and Tom for all her success.