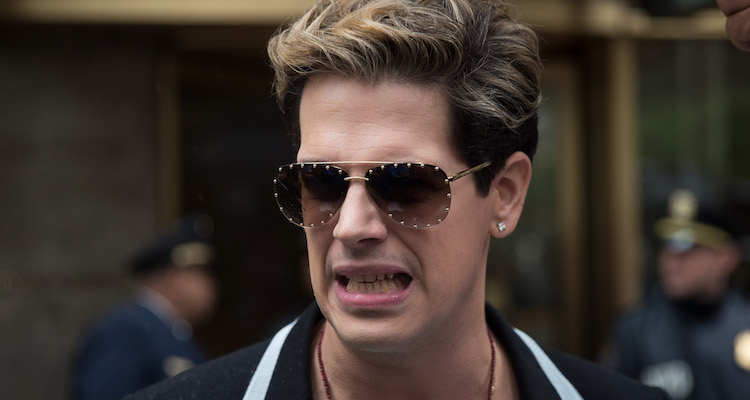 Who is Milo Yiannopoulos’ husband? The 32-year-old former Breitbart journalist tied the knot on October 1 and fans want to know more. Unfortunately, Yiannopoulos’ spouse keeps his life very private and if it weren’t for Yiannopoulos’ Instagram account, many wouldn’t know that his husband’s name is John and that he’s African American. The couple got married at the Four Season Resort Hualalai in Hawaii. John was wearing a white blazer that said “blind for love” on the back of it, and Yiannopoulos was wearing a black blazer with floral patterns on it. What does John look like? No one really knows, since his face was cropped out of the photos and the pictures are mostly of his back or hands.

Yiannopoulos is known for being his misogynistic, sexist, and Islamaphobic remarks. He’s infamous for being the poster boy for the “alt-right” and has been referred to as a Trump supporter. In an Instagram post, Yiannopoulos commented that his new husband is not Muslim and how fake the story was.

“I must be the most lied-about person in America. Every day it’s something new,” he wrote. “This week the press has invented a lie that my new husband is Muslim. It came completely out of nowhere. I don’t know why they are claiming this. I’ve seen it in a dozen press reports so far. Just an utter fabrication, never checked by anyone, billowing out into the internet and becoming ‘established fact’ despite being totally untrue. This is how the media works, and it’s why you can’t trust a word they say.”

In a recent interview with 3AW Morning radio journalist Neil Mitchell, Yiannopoulos was asked what he thought about Australia taking in 12,000 Syrian refugees.

“I’m suggesting you should send them back immediately because the only consequence of that is going to be a drain on public services and your daughters raped,” said Yiannopoulos.

Mitchell quickly asked if it made a difference if the refugees were Christians, to which Yiannopoulos replied: “Well, of course that makes a difference.”

The interview was awkward from there and Yiannopoulos accused Mitchell of trying to make him look uninformed and foolish.

Yiannopoulos is known for his stance on Islam and has many that either agree or disagree with his beliefs on social media.

Yiannopoulos and his friend, Pamela Geller, were seen last weekend at a drag show at New York City restaurant, Lips. According to New Now Next, Lips performer, Gusty Winds believed they were trying to make a scene and was proud of the staff and their professionalism.

“I’m so very proud of all of them, for their absolute stellar behavior and restraint,” Winds wrote. “It’s easy to get angry and engage, there is a time and a place for it. The place was not Lips last night.”