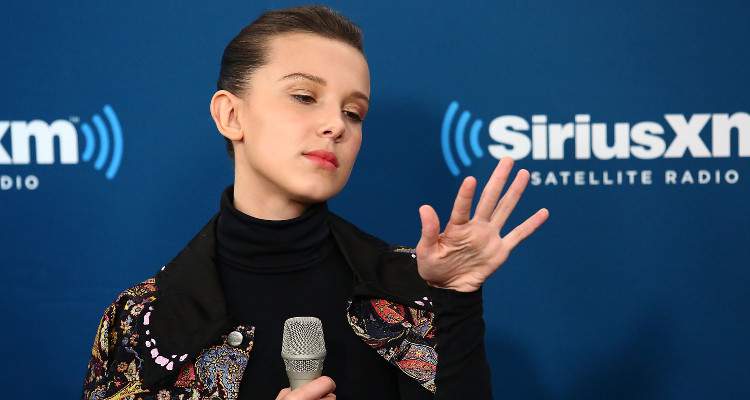 Millie Bobby Brown is not your regular 13-year-old. The star of Stranger Things is rising to the top since playing the mysterious Eleven on the nostalgia-infused show. In 2017, Millie Bobby Brown has a net worth of $3.0 million.

Millie Bobby Brown is like any teen her age. She loves binge-watching Keeping up with the Kardashians and can break out into a rap about anything. And if she can fight monsters in the ‘80s, so what? But this rising child star is going for big things, and already has a net worth of $3.0 million. Even with all the raises in our allowances, we couldn’t make that number at 13 years old! Here’s how she went from just starting out to being one of the richest young artists out there in Millie Bobby Brown’s net worth.

Raking in the Dough

Stranger Things brought Netflix back at the top of original digital content right when it lost its competitive edge to services like Hulu and HBO Go. In 2017, Netflix spent $6.0 billion on new programming, which meant an increase in the budget of Stranger Things season 2.

The horror drama not only salvaged Netflix’s declining viewership, but also made young actors into overnight stars and brought Winona Ryder back on the scene. While every member of the cast has earned Internet fame, Millie Bobby Brown stands out. She earned a net worth estimated to be $3.0 million and catapulted in pop culture as the iconic Eleven.

She outshone veteran actress, Winona Ryder who has a net worth of $18.0 million. The teen stars of the show were reportedly paid $30,000 per episode. Over the nine-episode season, that makes them $270,000 richer. Besides the hefty paycheck, these kids have been flooded with acting offers.

With seasons 3 and 4 in the planning process, the kids are up for salary negotiations. It is reported that Brown could earn more than her co-stars. Here’s how Eleven compares to her bicycle-riding ragtag gang of friends from Stranger Things.

Rise to the Top

The biggest star born from Stranger Things is Brown. She’s now set to make her feature film debut in the Godzilla sequel. And this teen, who’s sought by casting directors for her prenatural acting ability, only trained at a weekend acting workshop.

At the age of eight, she decided that she wanted to be an actress and her ever-supportive parents obliged. They packed their bags and moved Brown and her siblings from England to Florida so she could pursue her career. It was a move that brought the family to the brink of bankruptcy.

While Brown got small roles in shows like Grey’s Anatomy, Modern Family, and NCIS, she missed out on major roles. At one point, her manager, Melanie Greene lent the family money to survive.

When her acting career didn’t take off, the family moved back to the U.K. With no money left, they had to live with Brown’s aunt. “I was devastated. I wasn’t getting work. I thought I was done,” said Brown. Her motivation hit rock-bottom when a casting director told her she looked “too mature and grown-up” for kid roles.

The criticism made 11-year-old Brown cry as she auditioned for Stranger Things that same day. “I had to cry in the audition. My emotions were so raw, I hit it out of the park.” A few weeks later, the family was back on a plane to the U.S. where Brown was set to play an orphan with telekinetic powers with the least amount of dialogue and the biggest voice.

Kindness is so gangster. ?

The Duffer Brothers, who created Stranger Things, recalled filming the scene in season 1 where Eleven was dragged down a corridor shouting “Papa.” The entire crew paused what they were doing to marvel at her acting. “That was when we realized, as good as she is, she’s even better than we thought,” said Ross Duffer.

Now, this young actress, who’s deaf in one ear, banked $270,000 in one season of the Netflix juggernaut, earned bonuses, has more offers lined up, and signed an endorsement deal with Converse. She appeared in commercials for Citigroup and made her modeling debut with Calvin Klein’s By Appointment campaign.

The Eleven sensation reached its peak making Brown an in-demand actress. Some reports claim that her star quality is at such a status, she’s in a position to demand $4.0 million per movie.

A while back, there were reports that her father demandied $100,000 up front to sign Brown to an agency. With the success of season 1, entertainment agencies scrambled to sign the then 12-year-old acting sensation. But her father reportedly demanded a signing fee to represent her. The unorthodox demand raised a few eyebrows in the industry. A rep for the family confirmed he made that demand on ill-advice by an outsider.

As she is on a path to stardom, she has been likened to Tom Cruise and Meryl Streep for her talent by the directors she worked with. Along with praise, Brown has received tons of advice from industry veterans about staving off the curse of early fame. For now, this young starlet is reaching new heights while keeping her feet firmly planted on the ground.

I had such an amazing night at the 11th Evening Before fundraiser raising money for the Motion Picture and Television Fund. My personalised @converse made it easy for me to dance the night away and of course they were blinged up thanks to @lisasblingx ???