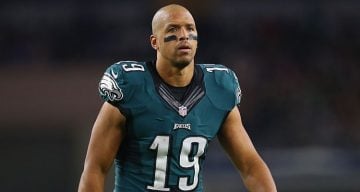 Miles Austin is a Dallas Cowboys legend. He played with the team for 8 seasons and while he did go on to play for another two seasons in the NFL, it’s hard to think of him wearing anything but a Cowboys uniform. But where is Miles Austin today? What is Miles Austin doing now? We’ve got all you need to know about what he’s been up to since Miles Austin retired.

Miles Jonathon Austin III was born June 30, 1984, in Summit, New Jersey, to Miles and Ann Austin. While attending Garfield High School, Austin discovered a love of sports and ended up being a letterman in not only football but basketball and track and field, as well. At the time, Austin had the third farthest javelin throw in Bergen County history, throwing the javelin a record 65.44 meters. He would go on to achieve All-Bergen County honors in football and basketball, as well as All-States honors in football. While Miles Austin could play any sport, football became the path he would follow.

Miles Austin’s Cowboys career began in 2006 when the team signed him as an undrafted free agent. The team saw a fair amount of potential in the young player and began using them on their special teams. During that first season, Austin returned 29 kickoffs for 753 yards and recorded 5 tackles. One particular playoff game against the Seattle Seahawks had Austin return 3 kickoffs for 136 yards in the game, one of which was a 93-yard touchdown return.

Austin’s second season with the Cowboys was also pretty solid and by the third season, he would have been starting but due to knee injuries, Austin would end up missing a number of games. The 2009 season saw Austin get his first NFL start against the Kansas City Chiefs. The 2011 season was a low point of Austin’s career with the Cowboys, as he was plagued by nagging hamstring injuries that would reoccur the rest of his career. While his last two seasons with the Cowboys were good, they were hampered by the hamstring injuries and eventually, Austin was let go in early 2014.

Miles Austin went on to play for the Cleveland Browns and then the Philadelphia Eagles, but he never played like he did with the Cowboys. On December 7, 2015, Austin was cut by the Eagles and his days as a professional football player were over.

Where is Miles Austin Now?

With a great career like that, you may be wondering where Miles Austin is now? Is Miles Austin back with the Cowboys? Is he still involved with football? Is he broke and lives under a bridge somewhere? Miles Austin is back working with the Cowboys, this time not as a player but as a scout trying to help management find the next big name player for the franchise that may help the team win a championship. One of the biggest dangers in NFL football is going broke.

When you are making millions upon millions of dollars, it’s very easy to lose focus on your money and where it’s being used. Unlike many of other NFL players that would be considered his peers, Austin has also done very well for himself in terms of his financials as he has a net worth of approximately $20.0 million.

For the longest time, his personal life was quite public as he dated Playboy playmate, Jessica Burciaga from 2009 to 2010, and then reality television star Kim Kardashian in 2010. But these days, it’s a fairly low key romantic life as Austin is now married to Stacy Sydlo. The couple were married on March 4, 2014, and seem very happy with one another.