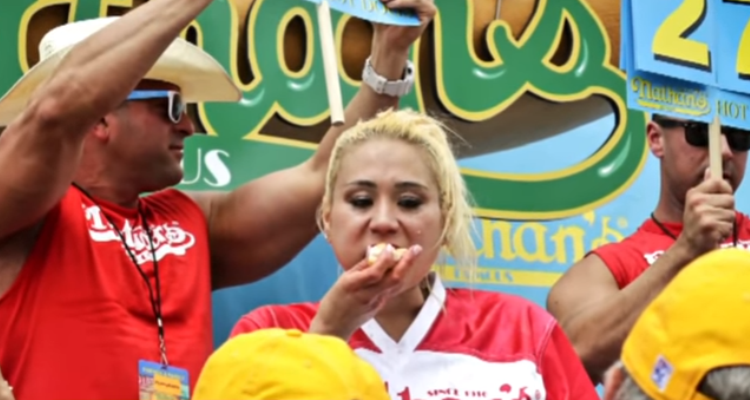 Many celebrated the Fourth of July with fireworks, parades and drinks. Others decided to celebrate their independence by eating their weight in hot dogs! That’s right—the 101st Nathan’s Hot Dog Eating Contest was on Tuesday and Miki Sudo was one of the winners! But what do we know about her? To learn more about the female competitive eater, here’s our Miki Sudo wiki.

Who is Miki Sudo?

Miki Sudo’s age is 31. She’s from Las Vegas, Nevada and is a competitive eater. Even though she ate 13.5 pints at the 2015 Credit Union World Ice Cream Eating Championship, she still lost to Joey Chestnut. Miki Sudo’s net worth and Miki Sudo’s weight is unknown, but if a competitor is as good as Chestnut, then they can make hundreds of thousands of dollars in a year! They don’t call Chestnut “Jaws” for nothing! Sudo is small, but she can definitely keep up with the guys! There isn’t an eating festival that Sudo hasn’t gone to or a plate that she didn’t clean. She’s turned eating into a fulltime job and she’s not exactly working as a food critic.

If you’re curious to find Miki Sudo’s hot pics or are looking to keep track of all of her eating adventures, then her Instagram is the place to go. She has 1,875 followers and over 300 posts about her life. She’s made friends out of fellow competitors and has beaten her own personal records. Whether she’s enjoying the day or eating for the pay, Sudo can be caught with just about anything in her mouth. (Get your mind out of the gutter, we’re talking food!)

If you have already wandered through Sudo’s Instagram, then chances are you know about her Facebook account and have made your way over. It’s no surprise that Sudo keeps track of all of her competitions—it’s her job after all! No matter what the temperature of the food or the size, Sudo finds a way to break it down and effortlessly does what most would throw up doing.

While Chestnut ate 72 hot dogs in 10 minutes, Sudo ate 41 hot dogs in the same amount of time, which earned her a straight fourth win in the women’s division. She beat Michelle Lesco and Sonya “The Black Widow” Thomas. The famed contest was held on Coney Island and thousands came to show their support, as well as those who came to see how someone could consume so much food at such a fast rate. (It truly is appalling.) Now, Sudo has giant gold belt to prove what a superior eater she is, and it’s not her first. She may need a new place to put her newest award, but if it’s anything like her stomach, we know she will find room! And while there was an arrest during the competition, it wasn’t enough to take away Sudo’s victory.

If you wanted to see Joey Chestnut and Miki Sudo scarfing down hot dogs like their life depended on it, check out the video below for highlights of the event!