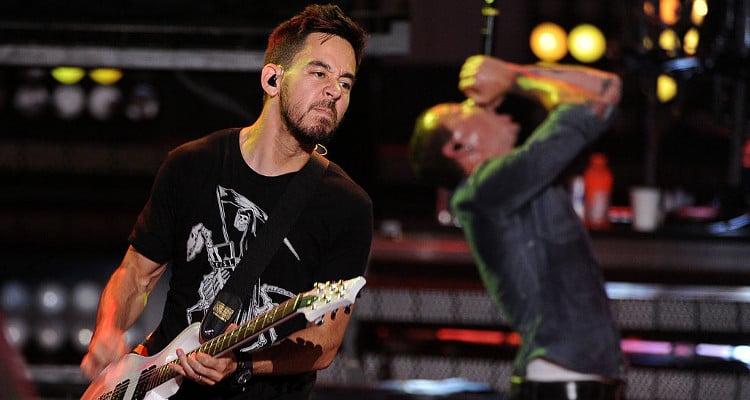 Linkin Park frontman, Chester Bennington passed away on Thursday (July 20). He not only leaves behind a grieving family, but his band members and fans. Bennington was a co-founder of Linkin Park along with Mike Shinoda.

The death of Chester Bennington has brought Linkin Park in the spotlight for a heartbreaking reason. His band members are obviously in grief with Mike Shinoda making the first statement from Linkin Park since the news broke. He promised an official statement from the band soon which will likely mention their upcoming tour. The first word from Shinoda has many curious about him and his family. Mike Shinoda and Anna Hillinger have been married for more than a decade. Find out about Mike Shinoda’s wife, Anna Hillinger right here.

1. She Is A Young Adult Author

Anna Hillinger was raised by her parents who survived the Great Depression, in a town that was “so small it lacked a stop light,” according to her blog. As a child, there was only two activities for her to pass time with: Climb trees or read books. Fortunately the tree-climbing tendency didn’t turn into something permanent. But her voracious appetite for reading made her passionate about writing.

She served as editor and writer for her school newspapers throughout her student life. Her writing earned her scholarships of merit to college. After graduating from Long Beach State with a Bachelor of Arts degree in communication studies, she worked in music PR. But her true calling was in writing. She penned her first novel, Learning Not to Drown for teens and from then there was no stopping her.

Mike Shinoda met his future wife in the late ‘90s when she was writing her first manuscript. Hillinger had joined the Society of Children’s Books Writers and Illustrators where her manuscript was lauded. The couple married in 2003, when Anna was on the path to a promising writing career.

They knew that for Anna’s work to be acknowledged based on her merit, she couldn’t promote it as being written by Linkin Park’s Mike Shinoda’s wife. So they came to a mutual decision to not mention anything about Mike or the band while she promoted her book.

Though it made the publishing process harder and longer, once her book was published, it was recognized for its worth. She was nominated twice for the Sue Alexander Most Promising New Work Award. Her net worth hasn’t been calculated but it’s probably not as high as her husband’s who’s $23.0 million rich.

3. She Is Involved with the Band’s Charity

Linkin Park as a group has actively supported various philanthropic efforts including Music for Relief. The wives of the band members have helped them in their charity efforts. Anna Shinoda has also done her bit towards Music for Relief.

She worked with Music for Relief both in the U.S. and overseas. Through the venture, she also developed a close bond with Talinda Bennington, Chester Bennington’s wife. The two have displayed their friendship over the years on each other’s social media.

4. A Wonderful Purpose for Writing

The 39-year-old’s debut novel, Learning Not to Drown centers around a 17-year-old named Clare, the youngest and only girl in a dysfunctional family. It follows Clare’s efforts to strive for a better life while dealing with problematic brothers and overprotective parents.

The book is a must-read for any avid teen reader. Hillinger, the mother of Otis Akio Shinoda (born 2009), writes for a teen audience. Her purpose to promote healing in young adults “whether it is confronting the unknown or facing a difficult truth,” she says in her blog. She takes inspiration from her own childhood experiences to write her many stories.