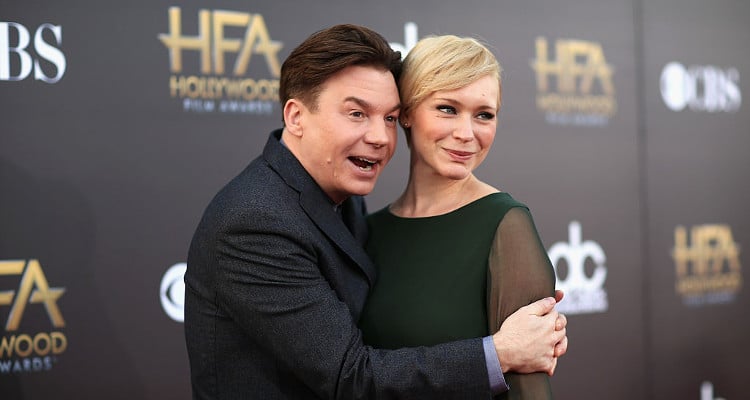 The Gong Show ruled television with weird and outlandish talent during the ‘70s, and now, it’s back in 2017! Mike Myers is believed to have resurfaced after a break from the spotlight in the wackiest way possible; as the host of the show, named Tommy Maitland! How does his wife keep up with the many faces of Mike Myers!?

Just when we were experiencing a Mike Myers drought, the comedic actor is believed to have resurfaced, this time as Tommy Maitland, the host of The Gong Show 2017 revival. Maitland is said to be another one of Myers’ personas like Austin Powers and The Love Guru. His dizzying range of characters could make even his most ardent fans confused, causing and Internet frezy of debates surrounding whether or not that is Myers as the host! Tommy Maitland’s appearance and mannerisms are so close to Mike Myers’, it’s uncanny! How do his wife and kids keep up with him? Who is Mike Myers married to? Mike Myers’ wife, Kelly Tisdale, rarely speaks to the media, but we do know Myers is a “family first” kind of guy. Find out everything you need to know about the actor’s wife, right here in our Kelly Tisdale wiki.

She’s Not an Actress

She graduated from Suffolk University with a degree in international affairs and government. She moved to New York City and worked at Human Rights Watch. She’s now a businesswoman and was one of the founders of Teany Café in the Lower East Side of New York City.

Also Read: Who is Will Arnett? Wiki, Wife, Net Worth, “The Gong Show” & 5 Facts to Know

Mike Myers is now her only relation to the acting industry. Many mistakenly believe she is related to High School Musical star, Ashley Tisdale. However, they are not sisters nor do they have any known relation. Ashley has only one sibling, actress Jennifer Kelly Tisdale.

She Once Dated Moby

Before Myers, Tisdale’s previous known relationship was with EDM extraordinaire, Moby. The DJ, known for his vegan lifestyle and his bald head, has a couple of vegan restaurants of his own. He started Teany café together with Tisdale in 2002, when they were still together. The café was famous for its teas and its menu.

A small fire broke out in Teany in 2009, which caused minor damage. Moby said it was Kelly’s decision to rebuild it. They reopened it in 2010, but the café closed for good in 2015. The Teany brand is now a beverage company in London. It’s not known whether Tisdale is still associated with Teany or if she has any other business ventures.

It’s interesting to note that Myers is a well-known fan and player of Dungeons and Dragons, and participated in the Worldwide Dungeons and Dragons Game Day in 2006. After the death of Gary Gygax, the creator of D&D, Moby was one of several celebrities who identified themselves as D&D players, as well. Well, they certainly have more in common then their taste in women!

She is His Second Wife

Tisdale and Myers began dating shorting after the actor split with his first wife, Robin Ruzan, an actress and comedic writer who Myers once referred to as his “muse.” They were creative partners aside from being husband and wife, and worked on Wayne’s World and the Austin Powers franchise together.

They met in 1987 at a hockey game in Chicago. Myers had caught a puck, which he used as an icebreaker to start a conversation with Ruzan. They hit it off and got married in 1993 after dating for some time. However, their 12-year marriage came to an end when they filed for divorce in 2005.

In 2006, Kelly Tisdale confirmed that she was dating Mike Myers. They got married in 2010 at a hush-hush ceremony in New York. The couple has three kids: Son Spike Alan (born 2011) and daughters Sunday Molly (born 2014) and Paulina Kathleen (born 2015).