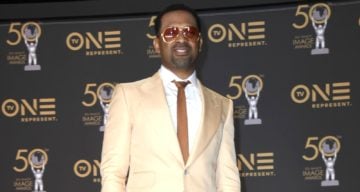 Mike Epps is back on Netflix with a new stand-up special, Mike Epps: Only One Mike. The multi-hyphenate comedian continues to attract extraordinary attention and rake in the dough with his many projects, building an estimated net worth of $6.0 million in 2019. Mike Epps’ is a story of rags to riches, as we illustrate here.

Mike Epps Sold Drugs When He Was Young

Michael Elliot Epps was born on November 18, 1970 to Mary Reed and Tommy Epps in Indianapolis, Indiana. He was being raised by his single mom when he got involved with the wrong crowd in his hometown.

In his biography, Unsuccessful Thug, he recalls that he resorted to selling drugs to earn money. He was arrested on drug-related charges in 1989 and sentenced to two years in prison.

Epps has since turned his life around, using his talent for entertaining since he was a teen. He first moved to Atlanta and performed at the Comedy Act Theater, and later relocated to Brooklyn when he was 21 to pursue a successful comedy career.

Also Read: Mason Reese’s Net Worth In 2019, How Rich Is The Former Child Actor?

From entertaining in his teen years, he went on to become a professional comedian. Starring in Def Comedy Jam in 1994, as well as its tours and specials, Epps has built a $6.0 million net worth and a diverse professional portfolio.

As his visibility rose, his stand-up shows became big earners for him. A booking listing reveals that Epps is paid about $50,000 for a gig.

Billboard disclosed in 2014 that live comedy shows had seen a growth in ticket sales and larger venues. That year, Epps ranked fourth on their Top 10 US Arena Comedy Tours list, grossing $480,566 in ticket sales from two shows.

Here’s how Mike Epps compares to other comedians.

Don’t Miss: John Singleton’s Net Worth At The Time Of His Death In 2019

Epps Starred in Movies and Shows

During his Def Jam Comedy days, Epps starred in Vin Diesel’s directorial debut, Strays (1997). After catching Ice Cube’s eye with his comedic skills, he replaced Chris Tucker as new character Day-Day Jones in the Friday sequel, Next Friday (2000). He’s set to reprise the role in the upcoming Last Friday, set for a 2020 release.

He went on to star in multiple movies and TV shows throughout his illustrious career, including in The Hangover and Sparkle. It is estimated that his long acting career has generated over $140.0 million in worldwide box office sales.

Together with his fiancée, Kyra Robinson, he has also executive produced several shows, including his own stand-up special on Netflix, Mike Epps: Only One Mike.

Epps Has a Rap Career on the Side

Besides his comedy, acting, and producing work, Epps has also ventured into music. He has featured in a few songs, videos, and albums by other artists.

He was the CEO of the short-lived Indianapolis-based record company, Naptown Records. He even signed an artist to the label, but the $175,000 contract fell through when the artist was convicted of murder.

Mike Epps was married to actress Mechelle McCain from 2006 to 2017. Together they have two daughters, while Mike has two older daughters from his previous relationships. He’s currently engaged to Kyra Robinson after a very contentious divorce from McCain.

Epps was ordered to pay McCain a whopping $25,000 a month in spousal support for a six-and-a-half-year period. He was also ordered to pay $15,000 in child support as well as pay the tuition for the his youngest daughters’ private school. They also had to split royalties from Epps’ films.

Epps Has a Luxurious Life

Where he once struggled to put food on the table, Epps now rolls in luxury. His wealth boasts several luxurious cars and massive properties.

In a 2013 interview, Mike gave GQ a peek at his envy-worthy car collection, which had a total of nine cars. His fleet boasted both vintage and modern cars valued at $3.0 million.

The couple agreed to split the profits from the sale of the Encino, California home they bought more than a decade ago for $3.4 million. The house sold in 2017 for $3.5 million.

Also Read: Jason Aldean’s Net Worth, How Rich Is The Country Superstar?