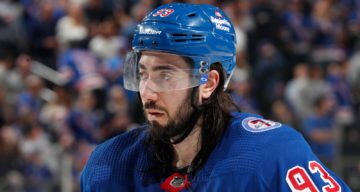 Mika Zibanejad #93 of the New York Rangers skates against the Pittsburgh Penguins in Game Two of the First Round of the 2022 Stanley Cup Playoffs at Madison Square Garden on May 5, 2022 in New York City. (Photo by Jared Silber/NHLI via Getty Images)

Mika Zibanejad is stamping his presence in the New York Rangers franchise this season. Not only are his skills on the ice getting attention, but also his personal life because the Rangers center and alternate captain entered the 2022 season a newlywed husband. Mika Zibanejad’s girlfriend-turned-wife, Irma Helin, knows a thing or two about professional sports. Apart from being a former professional athlete herself, she is now a sportscaster. She’s slipped under the radar for most NHL fans, so it’s finally time to take not of Mika Zibanejad’s wife in this Irma Helin wiki.

Irma Lovisa Hilda Helin was born in Sweden on June 18, 1994. Her family lives in Stockholm, where she grew up.

Irma is one of two daughters born to Ina Helin. Her mother works at the Karolinska University Hospital in the Swedish capital.

Her sister, Erika Helin, works for a television production studio in Stockholm. She is in a relationship with popular Swede podcaster, Pål Ströbaek.

Irma Helin studied at Vittra Södermalm, a primary school in her native city. She’s been an avid soccer player at a young age, with the intent of pursuing a career in the sport.

She went on to play for the Piteå IF football club in the Swedish women’s league, Damallsvenskan. She is the former midfielder for Djurgårdens IF Fotboll in the same league.

Helin won her first cap for the national women’s football team of Sweden in 2016. She led a 7-0 win over Iran that year.

Currently, Helin is a Discovery Channel show personality. She was also a football analyst for the coverage of the Swedish women’s soccer team at the Tokyo Olympics.

Mika Zibanejad, who is of Iranian and Finnish descent, grew up in Sweden. He used to play soccer as a child before switching to hockey.

He’s been in a relationship with Irma Helin since at least 2010. A year later, he was selected by the Ottawa Senators in the 2011 NHL Entry Draft.