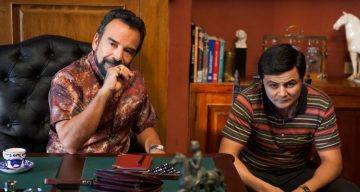 One of the top bosses of the Cali Cartel, Miguel Rodriguez, had a son named William Rodriguez-Abadia who worked off and on in his father’s illegal business. In Narcos season 3, William was named David and some parts of his life have been fictionalized. The real-life William struck a deal with American authorities and walked away from the deadly Cali Cartel.

Narcos season 3 gives a lot of screen time to Miguel Rodriguez Orejuela and his son, David, as they are neck-deep in Colombian cocaine trafficking. Miguel was one of the top bosses of the Cali Cartel who, at their peak, had control of over 90% of the global cocaine market. They were responsible for the push of the drug into Europe where they gained control of almost all of the cocaine business. No wonder they were known as the biggest crime syndicate of their time. In Narcos season 3, Orejuela son is shown as a hot-headed, not-so-bright sociopath who is always fighting with the Cali Cartel’s enemies. But was David Rodriguez really like that? Or did the makers of Narcos take some creative liberty? We have details about Miguel Rodriguez’s son right here.

Portrayed as a Psychopath

In real life, Miguel’s eldest son was named William, not David. William Rodriguez-Abadia was not like the David shown in the acclaimed Netflix show. At the end of Narcos season 3, David is seen bleeding out on the sidewalk after being shot by a rival cartel. David Rodriguez in Narcos season 3 is played by Guatemalan actor Arturo Castro, who described his character as a “kind of psychopath” and “a very hateable person.” While other criminals in Narcos sometimes show some humanity and can even be likeable, David is an all-out evil person with no redeeming qualities. But was the real-life son of Miguel Rodriguez Orejuela really like that?

Where Is William Rodriguez-Abadia Now?

In reality, William did not die in a flurry of bullets and did not play a very big role in the business, though he did look into the cartel’s affairs. He actually wrote a book about himself and the Cali Cartel titled I Am the Son of the Cali Cartel, writing in 2014, “I decided to write because I got tired of other people writing my story. I appear in more than eight books, my dad is in over 15, and what they have done is to turn this into a myth.” According to the Tampa Media Group, William lived in Broward County, Florida and collaborated with U.S. federal authorities to get a reduced sentence. He was shot in 1996 but survived and even ran the activities of the broken down Cali Cartel, but later had a change of heart. He walked away from the legacy his father and uncle left him with, and entered into a deal with U.S. authorities.

Also Read: Claudio Salazar Wiki: Everything You Need to Know about Carlos Camacho from “Narcos”

Former Cali Cartel security chief, Jorge Salcedo confirmed the tensions that existed between the cartel and William, “Yes, well, William Rodriguez was his oldest son and his successor. He sometimes complained to me. I always got to appointments first, to check the security around and make sure there wasn’t an ambush or anything. But because I was always at the meeting, I was a witness to everything that was spoken there.” Narcos showrunners admitted that some scenes with David in season 3 were fictionalized, which is why they did not name the character William. It’s to William’s credit that he walked away from the Cali Cartel, as it was only a matter of time before suspicion fell on him and he too would have been hunted down. He was smart to choose a relatively normal life instead of living one on the run.