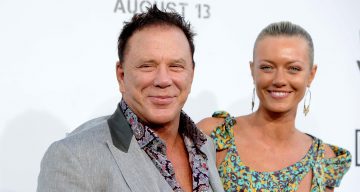 Although many people know Mickey Rourke for his acting, he actually started out as an amateur boxer and had little interest in becoming a movie star. Rourke won his first match at the age of 12, following it up with 27 more amateur boxing wins, with only three losses. After suffering several serious concussions, Rourke decided it was time to retire—although he would later return to the ring.

Rourke made his film debut in 1979 with Steven Spielberg’s 1941. He landed a few more notable roles before deciding to return to boxing because he felt like he didn’t respect himself as an actor. Despite beating many of his younger contenders, Rourke suffered many injuries, including a broken nose and a split tongue, and even required reconstructive surgery on his face. Fortunately, his acting chops were more than enough for him to return to Hollywood.

Rourke’s personal life has a history of being just as unstable. He has been married twice, both times to former co-stars. His second marriage, during which he was arrested for spousal abuse, ended in 1998. Since then, Rourke became known as a womanizer, especially of younger women. He even admitted to sleeping with 14 women in one night.

That’s why people didn’t really take it seriously when he revealed his latest sugar baby, Anastassija Makarenko, who was 33 years younger than him. Rourke claimed that when he first met the model, he wasn’t planning on the relationship getting serious but she has since changed his mind about love.

The celebrity couple has been together for about four years now, and Rourke credits Makarenko for turning him into a changed man. Rourke has promised that despite his rocky past, he’s never cheated on her. But that doesn’t mean he hasn’t thought about it. “I haven’t f***ed around on her. I haven’t been that way for 23 years so this is new to me and it’s not easy,” he told OK! Magazine. “Sure, I could do something on the side but I’ve got to live with myself.”