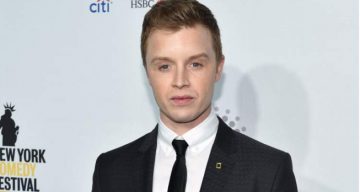 Why did Mickey go to jail in Shameless? It was a shocking seventh season and fans are reeling from the events that occurred. Many are left wondering, does Mickey come back in season 8 of Shameless? Keep reading to find out the answers to these very important questions!

The season 7 finale of the popular Showtime series Shameless left hardcore fans in anguish with pressing questions at the end of it all. Everyone’s favourite couple—Ian and Mickey—broke up (again) in a gut-wrenching and tearful final goodbye that was sealed with one of the most passionate parting romantic kisses that’s possibly ever been portrayed on a TV show. Some of us are still feeling brokenhearted. So, it’s no surprise that the most important question fans have regarding the future of the show has to do with Mickey. Does Mickey from Shameless make a comeback in season 8 or is he gone for good this time? You might even be wondering, why did Mickey go to jail in Shameless in the first place?

There’s a lot to unravel here, so keep reading to find out the answers to these and other crucial questions before the next episode airs on Sunday!

Why Did Mickey Go to Jail Shameless?

Towards the end of season 6, Mickey found himself thrown back in prison after attempting to murder Sammi Slott, Frank’s oldest daughter, by running her over with a car—a crime for which he received an 8 year sentence. Even though Ian already broke up with Mickey once in the beginning of his stint in prison behind the comfort of a plate glass window, the impact of that breakup wasn’t quite as resounding or earth shattering as the one that happened during the season 7 finale. There was still a glimmer of hope that they might get back together, whereas the breakup near the U.S.-Mexican border just feels so…final. For one thing, Mickey was still in the country after the first breakup and Ian could visit him in prison any time he wanted. Despite the fact that Ian and Mickey were planning on fleeing the country to start a new life together in Mexico, it’s obvious that there was something profound holding him back. There’s no doubt that he loves Mickey tremendously and they’ll always have an unbreakable and meaningful connection. That said, the reality that they’re also very toxic influences for one another and in the same vein that they bring out the best in each other, they also manage to unleash each other’s worst characteristics. Maybe that’s why their personalities complement one another so well and they have so much undeniable chemistry.

Who Plays Mickey on Shameless? Is He Coming Back?

I wonder what has Mickey's eyebrows so raised?!? #Shameless #5×03

Mickey is played by the very charismatic, talented, and versatile young actor, Noel Fisher. At this point, he might as well just be called Mickey from Shameless because that’s pretty much how most people know him despite, the fact that he’s a whole slew of other equally popular and high profile prior roles. You may also know him from such blockbuster movies such as The Twilight Saga—Breaking Dawn Part 2 and the Teenage Mutant Ninja Turtles franchise. He’s also made appearances on Law & Order: Special Victims Unit and Criminal Minds: Suspect Behavior. Most recently, Fisher was cast in the lead role of the new miniseries, The Long Road Home. The show is based on the true story of Tomas Young, a former American soldier who was motivated to enlist in the army and support the war effort in Iraq following the 9/11 attacks in New York. During his stint in the Middle East, Young was severely injured in the midst of an ambush and became paralyzed from the waist down. He now speaks out against America’s involvement in the Iraqi war.

When asked whether he’d be reprising his role as Mickey Milkovich on Shameless, the Canadian-born actor had this to say:

“There’s always a possibility [for Mickey to return], but as far as I know that’s not happening. But you know—he could sneak into Mexico, so he could sneak out of Mexico.”

In other words, there’s a chance that this might not necessarily be the last we’ve seen of Mickey! Although, judging by the slew of upcoming and time-consuming TV projects Fisher has already lined up for the foreseeable future, along with the fact that the cast and crew have already wrapped up filming season 8 of Shameless, it’s highly unlikely that Mickey will be returning any time soon, if at all.

Catch Shameless this Sunday night on Showtime and Happy Holidays from Mickey Milkovich!

Thanks for the XMAS present @shameless ???? #Repost ・・・ Ain’t got any presents under the tree but #Santa came twice… #MerryChristmas #Gallavich #SKOI #HappyHolidays