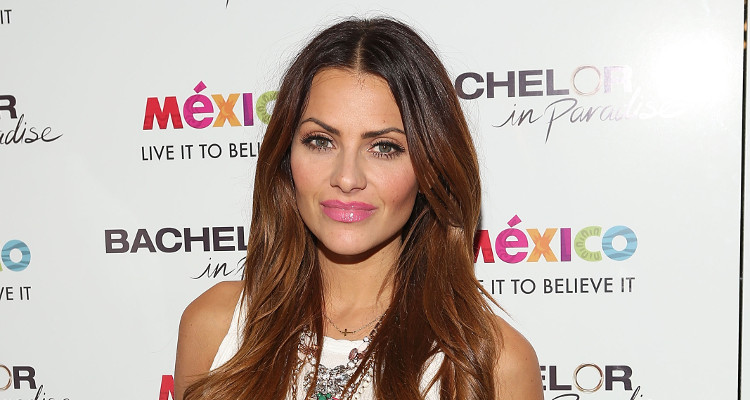 Reality star, Michelle Money took to Instagram to show her love for the man she’s dating, who is none other than Canadian pro-golfer, Mike Weir. If you are part of Bachelor Nation, you’d recognize the Bachelor villain, Michelle Money right away.

Fresh off her breakup from her Marriage Boot Camp costar, Michelle Money has a new man. It looks like she’s done with finding love on reality TV because she’s now dating pro-golfer, Mike Weir! Weir won the Masters Tournament in 2003 and the PGA Championship in 2006. Money shows her love for Weirs on her Instagram with numerous posts and declarations of love. Here’s more about Mike Weir’s girlfriend and reality star, Michelle Money.

#1. Her TV Journey Began on The Bachelor

Michelle Money is one of the lesser-known villains of The Bachelor franchise. The 35-year-old first debuted on The Bachelor Pad in 2010. She went on to appear on Bachelor in Paradise season 1 in 2014. There, she developed a relationship with personal trainer, Cody Sattler. They were one of the winning couples, along with Marcus Grodd and Lacy Faddoul. When they briefly broke up, she joined the rest of the Bachelor cast as they were reunited on The Bachelor at 20: A Celebration of Love, that featured Jade and Tanner Tolbert’s wedding.

Sattler had been on The Bachelorette season 10 for Andi Dorfman, the same season that gave a start to newly-engaged Bachelor, Nick Viall. Money and Sattler later starred together on WE TV’s, Marriage Boot Camp. To say their time on Marriage Boot Camp was dramatic is an understatement.

The couple constantly fought on camera. In one of their biggest fights, Sattler aired their dirty laundry in public. What happened? Sattler began talking about his trust issues with Money because she cheated on her ex-husband. Money, on her part, admitted the news but didn’t appreciate Sattler bringing up her ex-husband and their child. The argument escalated pretty quickly into a physical altercation. The couple split soon after the finale aired.

#2. From Hairstyling to Modeling

Money is a professional hair and makeup guru. According to her blog, she started at the Estée Lauder counter at Macy’s and went on to freelance for Bobbi Brown, Mac, Laura Mercier, Paula Dorff, TiGi, and Biotherm. She graduated from Hairitage College of Beauty and became a licensed cosmetologist.

She launched The Money Method, a 14-day online course to teach women the art of makeup and develop their confidence. The participants of this program can later join Money Talks, a subscription program focused on confidence, beauty, health, love, and many such other topics. She also collaborated with The Beauty Destination to give advice on improving the skin and body.

A few things. First of all- if you want to know the best tips on applying concealer- click the link in my bio! While you're at it- please take note of the freaky changes that have happened with my voice!!! It is CLEARLY deeper and is kind of freaking me out. It's been like 5 months now and I'm wondering if this has happened to anyone else??! Thinking it could be from talking on Good Things Utah every M-F for the last almost 2 years??? I'm totally not sick (that I know of) and it doesn't hurt at all. It's just freaking weird. Plus I can't sing like I used to…..and you guys know how much I love to sing. ???Anyway- concealer tips….check it out! Xoxo

Her reality stardom has given way to more opportunities for this hairstylist. She ventured into modeling with Reebok, MasterCard, and Sports Illustrated. Money also tried her hand at acting in the movies, Midway to Heaven and InHumane and she also co-hosts the talk show, Good Things, Utah!. Her net worth is not known, but it certainly can’t be small with all of her successful ventures. Though she is a career-driven woman, Mike Weir has a net worth of over $30 million and can certainly provide her a comfortable life if she ever decides to take a break!

In an interview in 2016, Michelle Money revealed that she found out she was pregnant at 15, and made the difficult decision to put her son up for adoption. While she doesn’t regret her choice, it didn’t make it any easier. “I didn’t even know what I was getting myself into, but once I went through the birthing experience and held him in my arms and loved him so much … it was a lot of emotion to deal with at such a young age,” she told People.

She didn’t disclose the identity of her son’s father, but only had nice things to say about him. “He was wonderful and an amazing boyfriend and was very supportive,” she said, adding that he himself was adopted, which gave her some insight to make the decision.

Money hasn’t kept in contact with her now 19-year-old son or his adoptive parents, though they sent her pictures and letters of the first few years of his life. Her biggest fear is he’d misunderstand her reasons for giving him up. She didn’t give him up because she didn’t want him, as she explained in an interview, she was just too young for motherhood. “I really don’t want to initiate any contact. It’s one of those things you have to be so fragile with. When he’s ready, if he’s ready, if they’re ready to tell him and he wants to reach out to me, then I would be so excited. I don’t want to put him in a position where he has to make that decision if he’s not ready to make it.”

To me, real beauty is owning your truth. Im ready to finally do that today.  Please click the link in my bio to hear about how my life changed forever 20 years ago. Thank you @pmdpersonalmicroderm For helping me open up about this very intimate part of my life. My hope is that my story can empower even one person out there. ❤️#adoption #birthmom #teenpregnancy #adoptionislove

#4. She was Once Married

As Cody Sattler revealed, Money was married to a man named Ryan Money. The couple have a daughter named Brielle, who is 11 years old. Since their divorce, Ryan and Michelle don’t get along well. It’s understandable, since she admitted that she cheated on him in the past. Nevertheless, the couple found a way to work out their differences for their daughter’s sake.

Money recently told Brielle (who wished for a sibling) about her older brother who was put up for adoption. Money felt she was old enough to process that information and she took it well. “When I told her, she was just really excited and was crying and emotional and couldn’t believe that she really does have a big brother. But I also had to be so careful not to give her false hopes,” she explained. Money told People, “I had to remind her that he’s out there somewhere, but we might not ever meet him. She needed to be okay with that —more than anything, I just want to make sure that I don’t get her hopes up for something that might not ever happen.”

I've been looking for fun things for Brielle to do this summer to enjoy the outdoors and meet new friends. Especially things that don't include a trampoline. ??? I came across ivivva's Sisters of the Summer Festival on July 1st @ 6:30pm in Liberty Park. The festival is inspired by Coachella with a sunset yoga flow, live music, hair braiding station, Henna tattoos and more. Your daughter doesn't want to miss out on this, call 801-262-2668 to reserve her spot today! @ivivva_fashionplacemall

#5. She Had a Brewing Romance with Weir

Following her split with Cody Sattler, Michelle Money’s Instagram featured a certain pro-golfer. In August 2016, she captioned a post of the 46-year-old athlete with “Mine. ❤” and tagged his Instagram account. He posted another photo on his Instagram with her the same day. From then on they were often seen together on Instagram, including their recent vacation in Hawaii. If this isn’t a social media confirmation, we don’t know what is!

Money’s most recent Instagram shows her playing golf with her beau and another spending time with his daughter, Elle and Lili. Lili recently celebrated her 17th birthday and Elle is now a college student.

Hole in one for my man @mweirsy today!!! ??I had the honor of caddying for him at @themasters par three tournament! It was truly one of the most magical experiences of my life! We made it to the 7th hole before it got canceled due to the rain but it was pure bliss! Rain and all! Enjoy the photos! Pics by @doug_cartwright ❤️#themasters #teamWeir #augustanational