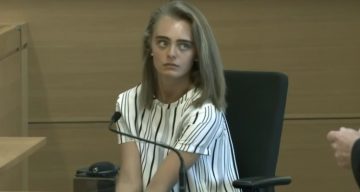 Michelle Carter’s fate has finally been decided by a Massachusetts judge as he ruled that she was the reason behind the death of 18-year-old, Conrad Roy III. Who is Michelle Carter? Keep reading to learn more about her in our Michelle Carter wiki.

Justice has been served to the family of Conrad Roy III, who killed himself in 2014. Roy was found dead in his truck from carbon monoxide poisoning on July 12, 2014, after receiving text messages from his girlfriend encouraging him to commit suicide. Michelle Carter’s case has taken the Internet by storm. The verdict was finally announced on June 16, 2017, as Judge Lawrence Moniz found Carter guilty of involuntary manslaughter, meaning she could face up to 20 years in prison. What did Michelle Carter text Conrad Roy? We have the answers to this and more about the girl who told her boyfriend to kill himself, right here.

Carter was born on August 11, 1996 in Massachusetts and graduated from King Philip Regional High School, Wrentham. Michelle Carter’s parents are Gail and David Carter and they have both denied that their daughter is guilty of causing her boyfriend’s death.

Carter and her late boyfriend, Conrad Roy, met back in 2012 in Florida. Their relationship was mainly long-distance and they kept in touch either through Facebook or with text messages. According to court documents, Roy was abused at home and tried killing himself in 2012. When Carter discovered that her boyfriend was suicidal, she initially advised him against it. But, in 2014, something in her mindset changed, and she believed that it would be a “good thing to help him die.”

Her psychiatrist stated that Carter became delusional because of the change in her anti-depressants, which she had been taking since she was 14. On the other hand, prosecutors claimed that Carter pushed Roy to kill himself as an attention-seeking tactic. Her lawyers stated that when Roy committed suicide, Carter was facing her own problems and felt overwhelmed because of her boyfriend’s condition.

What Did Michelle Carter Text?

Before Roy killed himself, a series of text messages were exchanged between him and Michelle Carter. After reading the messages, it had become clear that Carter pushed Roy to kill himself when he was having second thoughts.

According to reports, Roy was trying to indirectly get help from Carter. He messaged her saying, “I keep regretting the past it’s getting me upset,” to which she replied, “Take your life?”

She continued to send him a series of texts telling him, “You need to do it, Conrad” adding, “You can’t think about it, you just have to do it,” before asking, “Are you going to do it today?”

After Roy revealed to his girlfriend that he had taken sleeping pills as a way to end his life, Carter told him, “I feel like such an idiot … because you didn’t even do anything. You said you were going to the woods to do it … I poured my heart to you … I thought you really wanted to die, but apparently you don’t … I just feel played and stupid”

Carter even sent Roy a list of different ways he could kill himself. She wrote: “Hang yourself, jump off a building, stab yourself idk there’s a lot of ways.”

Also Read: Amber Hilberling Wiki: Who is the Woman Who Allegedly Killed Her Husband?

#MichelleCarter found GUILTY of involuntary manslaughter in the death of Conrad Roy. Carter had sent a stream of texts to her then boyfriend, encouraging and pushing him until he eventually took his own life. Her sentencing is NOT controversial. I'm tired of seeing everyone play devil's advocate. It's time that people start being held accountable for things like this. Her actions should not be tolerated, let alone defended. If it was your son, brother or friend who took their own life after being put in the position that Conrad was you would probably want whoever was on the other end of that phone held accountable too. STOP DEFENDING HER.

Michelle Carter was 17 when she sent those messages to Conrad Roy, who killed himself while inside of his truck in Fairhaven on July 12, 2014. On Friday, June 16, 2017, Judge Lawrence Moniz delivered his verdict and said that Carter’s actions were reckless. While inside, Roy was reportedly having second thoughts as the truck started to fill up with carbon monoxide. At one point, he told Carter that he was scared, but she told him to get back inside. During his verdict, Moniz said, “She did not issue a simple additional instruction: Get out of the truck.” Carter was charged with involuntary manslaughter and might face up to 20 years in prison. She will continue to be free on bail until August 3, 2017.

Upon hearing the verdict, Conrad Roy’s mother and father were glad that justice was served, but also stated that nobody had won the fight.

You can take a look at the entire conversation that took place between Roy and Carter below.