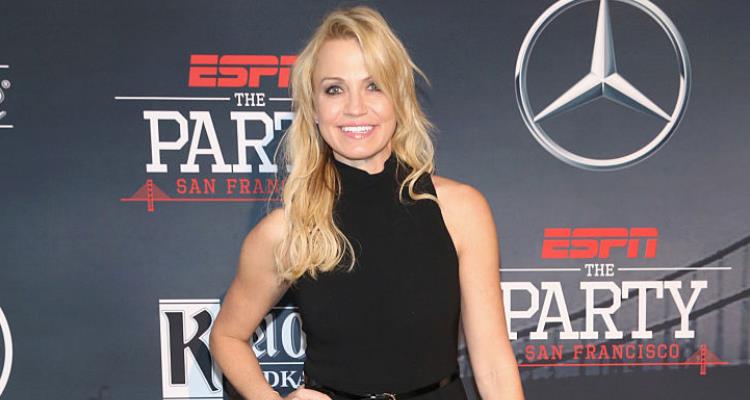 Michelle Beadle is one the most respected and valued female sports journalists on ESPN. Since 2009, she’s been co-hosting SportsNation on ESPN2, alongside fellow sports journalists Marcellus Wiley and LZ Granderson. Despite having little to no prior experience working as a media representative or sports analyst, Michelle Beadle seems to be doing just fine! In fact, fans have fallen in love with this beauty! Keep reading to see some of Michelle Beadle’s hot pics and find out how she was unexpectedly thrust into the exciting world of sports and entertainment!

You may know Michelle Beadle as the opinionated (and often outspoken) female co-host of ESPN2’s SportsNation, but there’s a lot more to her than you might think! For one thing, the blond beauty didn’t always have ambitions to become a sports journalist. In fact, her career trajectory initially began with plans to become a lawyer in Austin, TX. However, after three years of working with a local law group there, she decided that this career path was all wrong for her. After working a series of odd jobs, Michelle was able to land the coveted gig of SportsNation co-host for ESPN, beating out approximately 147 other qualified candidates!

Surprisingly, it wasn’t just her beauty that helped her obtain the job (although it probably helped a lot), but it was her enthusiastic onscreen personality and incredible wit that ultimately helped her land her dream job.

Since then, she’s become a fan-favorite thanks to her unadulterated ability to tell it like it is (especially whenever the topic of LaVar Ball seems to come up), not to mention the fact that she’s very easy on the eyes. How easy on the eyes? You’re about to find out! Keep reading to see some Michelle Beadle’s sexy pics and learn a little bit more about her!

She Loves Her Graphic Tees

So I’m addicted to making shirts now. It’s communication. Without the confusion of talking and stuff. #BlessYourHeart

They say a picture’s worth a thousand words and this one definitely says it all! Judging by Michelle Beadle’s Instagram pics, it’s no secret that she loves making her own graphic tees. Though, we’re sure when she’s modeling them, no one’s really looking at the tees.

Happy birfday to the sister I always wanted. Love ya, @yeahitsmejenna

Here’s a cute birthday tribute to Jenna Nolen, the music coordinator on The Late Late Show with James Corden. Both ladies look as radiant as ever!

Will be celebrating some America all day from the motherland. I got you…#HappyFourth

Here’s another one of Michelle Beadle’s photos where she’s showing off her patriotism, even when she’s not on American soil! This one is aptly captioned, “Will be celebrating some America all day from the motherland. I got you…#HappyFourth.” Michelle Beadle was actually born in Italy and moved to Roanoke, TX when she was a young child. But her patriotism for the U.S. is unwavering!

Another 3 hour lunch. I'm seriously screwed when I get home. Also my hat is badass. Don't @ me.

Obviously, Michelle Beadle just loves soaking up the sunshine in scenic locations and bragging about it on Instagram! (Yes, we are jealous.) Here’s the 42-year old just chilling in a stylish floppy hat on the Amalfi Coast. Just look at that gorgeous tan!

Did I miss a holiday or something? #NationalSelfieDay #Amalfi

Since National Selfie Day is such an important holiday, obviously we had to share this one of the blonde bombshell! Finding Michelle Beadle’s bikini pics aren’t difficult, as she practically lives in them! She certainly enjoys a little rest and relaxation on the beach!

Standing Up for What She Believes In

As mentioned, Michelle Beadle isn’t just a pretty face. She’s also not afraid to express her opinions and stand up for the things she believes in, even if her opinions conflict with others. Here, she is showing her support for basketball champion Shaquille O’Neal, who stated that he disagreed with Colin Kaepernick’s method of protesting injustice in America by kneeling during the national anthem. There’s nothing sexier than a fearless woman who says exactly what she thinks!