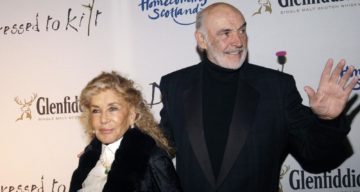 Micheline Roquebrune is a multi-talented artist, athlete, and producer. But she is perhaps best known for her connection to the original 007. The late Sean Connery’s wife, Micheline Roquebrune, has stayed largely out of the spotlight over the years. This has only sparked more interest in the woman who was married to the “Sexiest Man Alive” for over four decades. So, we answer all the burning questions about Roquebrune’s children, career, and net worth in this Micheline Roquebrune wiki.

Who Is Micheline Roquebrune?

Micheline Roquebrune was born on April 4, 1929, in Nice, France. She is of Moroccan-French descent. Not much is known about her childhood and upbringing, but she is said to be fluent in French and Spanish, while understanding Arabic.

A young Micheline Roquebrune enjoyed a successful career as a painter. Focusing on intimate renderings of close family and friends, she began developing her style at the age of 23.

In her later years, a collection of her work was featured at the National Museum of Women in the Arts in Washington, D.C. Loved ones from multiple countries gathered in the U.S. capital for the 2000 opening of the exhibit, which included 14 portraits of her husband Sean Connery, her children, and other family members.

Roquebrune’s paintings have also been displayed in cities like Chicago, Athens, and Rome, as well as in her native France.

Roquebrune has dabbled in theater production as well. She bought the English-language rights to the French play Art and brought it to the U.K. and Broadway where it enjoyed critical acclaim.

Plus, she’s credited as a crew member on the 1983 Bond film Never Say Never Again.

According to her Facebook, Micha attended Lycée Lyautey, a French secondary school located in Casablanca, Morocco. She appears to live in France, and often shares photos of her parents, children, and grandchildren on social media.

Olivier is a California-based tech entrepreneur. His LinkedIn lists him as founder and CEO of Winnov, a now-defunct hardware company that specialized in HD capture and streaming.

Among her many interests, Micheline Roquebrune is an also avid golfer. The gentleman’s game in fact introduced her to her third husband. Roquebrune met screen idol and James Bond himself, Sean Connery, at a golf tournament in Morocco in 1970.

She was living in the North African country with her children at the time, which Connery once said was “difficult” on their budding relationship. But they were also married to other people. Then there was the language barrier—Roquebrune didn’t speak much English back then.

Nevertheless, they wed five years later, on May 6, 1975, in Gibraltar.

They were married for 45 years, until Connery’s death from heart failure on October 31, 2020. Roquebrune said he also suffered from dementia. Their marriage weathered its share of ups and downs, including Connery’s highly publicized affairs. But Roquebrune maintained a rather practical outlook on their union.

“When I met Sean, I knew I was taking on the whole package. Everyone wants him and I have to accept and understand that,” she’s been quoted as saying.

The couple did not have any children together. However, Roquebrune is stepmother to Connery’s son, Jason Connery, from his marriage to actress Diane Cilento. Micheline’s son Stephane and his wife and daughters use the Connery surname, though the actor never formally adopted him.

Before she was a painter, Micheline Roquebrune was a professional golfer. She reportedly even won the women’s tournament where she and Connery first met. Roquebrune likely secured cash prizes for her victories on the greens.

And considering her visual art has featured in exhibitions worldwide, it’s fair to assume she’s also earned income from their sales. On top of this, her take on the stage play Art was a critical and commercial success, both on Broadway and London’s West End.

Roquebrune and Connery also shared a residence in the Bahamas’ exclusive gated community, Lyford Cay. There, the average price of real estate is over $3.5 million. Connery reportedly had a net worth of $350.0 million at the time of his death.

All of these factors may contribute to Roquebrune’s net worth, which has been estimated at anywhere between $700,000 and $2.5 million. However, the exact figure is unknown.