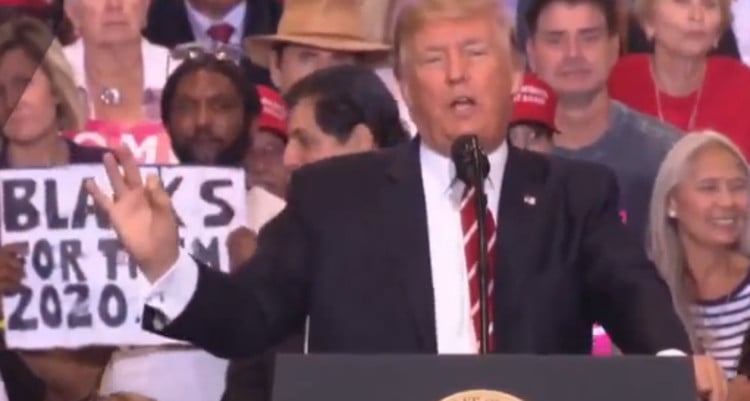 With friends like Michael Symonette, who needs enemies? Symonette, who calls himself “Michael the Black Man,” is a fiery preacher of conspiracy theories against Democrats. His websites promote his bizarre outlook, and he is advocating African-Americans to support Trump for the 2020 election.

To put it mildly, Michael Symonette is a controversial man. Known as “Michael the Black Man,” he is an avid supporter of President Donald Trump and rallied many African-Americans during the 2016 presidential election to support Trump’s campaign. He was both highly visible and boldly outspoken in his unwavering support for Trump and his policies, while insisting that Trump and Republicans are not racist. Trump’s win did not end the seemingly one-sided relationship between Michael Symonette and Donald Trump. Even though we are not even one year into Trump’s presidency, Symonette is already preparing for 2020. He is the driving force and owner of the organization “BlacksForTrump2020,” which intends to support Trump in his future reelection bid. Keep reading for some details from Michael Symonette’s wiki.

Killer on the Loose?

There is no information on Michael Symonette’s age, but we do know that he was once a member of the dangerous and murderous Yahweh ben Yahweh cult, led by the charismatic preacher, Hulon Mitchell Jr. The cult was charged with conspiracy in the killings of several people in 1990, including a gory beheading. Symonette was one of the many charged for allegedly conspiring in two murders, and his brother (also a member of the cult) told jurors that Symonette helped beat one man who was later killed, and put a sharpened stick in another man’s eye. Still, the jurors found Symonette innocent, and he was set free.

In the years that followed, Symonette started a radio station in Miami and christened himself “Michael the Black Man.” He is now an anti-gay, anti-liberal preacher who is typically seen on TV during GOP events. He was covered on cable news for bashing Barack Obama, and insists that he is not being paid by Trump for any of his activities. He was also charged with grand theft auto, carrying a weapon on an airplane, and threatening a police officer, but was never convicted for any of these cases.

Symonette is a Hillary Clinton basher and has been trying to convince people that she and her family are racists. His website “Gods2.com” leads visitors to “HonestFacts.com,” where he lists strange conspiracy theories against the Cherokee and Clinton. One conspiracy theory has the “Real KKK slave master revealed and is the Cherokee,” while another claims that Obama and Clinton are actually Cherokee. Symonette hasn’t spared Republicans either, and claims that John McCain, Jeff Flake, and Mitt Romney are “White hidden Mormon/Cherokees.”

Symonette organized rallies against Obama, especially during the 2008 election. He brought people together calling his organization “Blacks Against Obama,” and even accused Obama of trying to have him assassinated! At that time, Symonette told the Miami New Times, “This was supposed to be an assassination. Obama’s people were behind it.” He claimed that two gunmen shot at him and that a bullet actually grazed his head, drawing blood. His brother was allegedly shot at by another gunman who was subsequently arrested, but the two Symonette spoke of were never found.

Symonette is in the news again because of his continued support for Trump. He was the man seen standing behind President Donald Trump at his rally in Phoenix, Arizona, on August 22, 2017. This struck observers as strange because Symonette rarely ventures outside Miami. Michael Symonette continues to march to the beat of a drummer only he can hear!