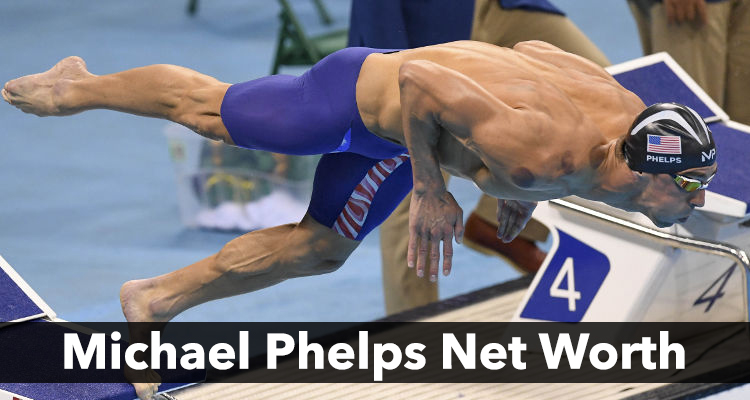 When you think of the American swim team, there’s a good Michael Phelps comes to mind. His feats and wins in swimming have been popular in the news and now that’s competing in Rio, we expect to see him in headlines again. For Michael Phelps, medals are like rain. They keep pouring in. Just when everyone had written him off, he has come back with a bang! For Michael Phelps, the 2016 Olympics has begun in the usual fashion. Winning the gold medal, yet again. But in all this flurry of achievements, one thing that people want to know is, “What is Michael Phelps’ net worth?”

Well, Michael Phelps’ net worth is $55.0 millionand is sure to increase, following his performance at the 2016 Rio Olympics.

With so many medals, it’s amazing Phelps can still hold his head high, but it seems now, he has all the more reason to! In total, Phelps has acquired 23 medals, making him the most decorated Olympian of all time. He has 19 Olympic gold medals in all, 11 gold medals in individual events and 13 gold medals, which is the highest for any male Olympian. In the 2008 Beijing games, he won eight gold medals in all, beating the long time record of seven gold medals held by fellow American swimmer, Mark Spitz. This feat was particularly amazing because many thought that this record would never be broken. Phelps didn’t stop here. He went on to win a clutch of medals at the 2012 London Olympics, as well.

After the 2012 Olympics, Phelps decided to retire and said this was his last Olympics. However, something kept eating him from inside and it didn’t feel right. In April 2014, he made the decision that made all his fans overjoyed. Michael Phelps was back in the game. Phelps says it was the team’s bad performance in the 4 x 100 m freestyle relay events that prompted his decision to come back. He qualified for the 2016 Rio Olympics and was the proud flag bearer for America at the opening ceremony. Phelps straight away proved his worth in Rio by powering his team to a gold medal win in the 4 x 100 m freestyle relay final. With several more events lined up, Phelps might just shatter his own records once again!

The home front is looking good for Phelps, as well. Though Nicole Johnson is not yet legally his wife, they have already started their family. They recently welcomed a baby boy into the world on May 5, 2016, and they have named him Boomer Robert Phelps. Phelps has posed for countless pictures being the proud Daddy of his new baby boy. Johnson too has put pictures of herself and her baby on Instagram. Though Phelps is known to have incredible focus when he is participating in his events, people close to him say that he is a very kind-hearted man. He is very interested in the betterment of the people he cares about. This is why he used his own prize money to set up the Michael Phelps Foundation. Through his foundation, Phelps promotes swimming and encourages people to have healthier lifestyles.

Getting Sober, Getting Better

Phelps himself is following a healthier lifestyle after shifting to Arizona. He hopes to get rid of his drinking troubles that plagued him earlier in his career. His recent arrest for drunk driving was a wake-up call for him and getting back together with his former coach, Bob Bowman has really put him on a fast path to recovery. He bought a house that gives him fantastic views of the stunning, rocky Arizona desert and he lives in the cradle of nature, that is so good for him, too. In fact, he says that he is feeling better than ever. The house, the fresh air and most of all his partner and baby boy have changed him into a better person.

Now that Phelps has proved himself once again, all eyes are on him. He has apologized for smoking marijuana, driving under the influence of liquor and for going off the rails. The press has asked him several times whether he has taken performance enhancing drugs and Phelps has always been strong and firm on his responses of ‘No.’ He has passed every test that he has ever been administered, so this controversy has also been laid to rest.

No matter what happens, Phelps will always be known as one of the greatest swimmers and sportsmen of all time. His long, narrow torso offers low ‘drag’, his long arms act as giant ‘paddles’ and his 14 inch feet act as ‘flippers’. All this combined makes him the greatest swimming machine the world has yet seen. But winning medals is no longer what motivates Phelps as he is motivated by what he can do to make a difference in people’s lives. Teaching kids to be active and healthy is what keeps Phelps busy when he is out of the water.