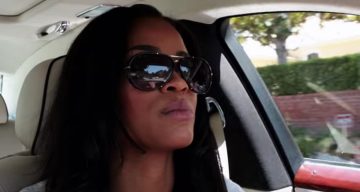 Michael Obeng did not learn from his mistakes but his ex-wife, Veronika sure did! When she found out that Obeng had cheated on her yet again, she did not hesitate to divorce him. She also aired her troubles on the reality TV show, Second Wives Club only to see an enraged Obeng sue the network. Among all the drama, the other woman has remained silent.

The cookie has crumbled! That’s right. Dr. Michael Obeng’s marriage to his third wife, Veronika is over. The reason for this development is none other than Michael Obeng’s mistress, as alleged by his now ex-wife. Veronika has claimed that their marriage ended because she discovered Michael Obeng’s girlfriend. She has alleged that her ex-husband broke her trust yet again after repeated warnings. She already caught him cheating a year ago, but decided to work with him to save their marriage. However, this time she was in no mood to forgive and carry on as if nothing had happened.

Veronika filed for divorce in July 2016, after finding out about Michael Obeng’s latest affair. She says that she found out that Michael Obeng was cheating on her via a secret Instagram page owned by his mistress. This was the last straw! Veronika coolly decided to take appropriate steps and nail Obeng straight on reality TV. Second Wives Club was filming its first season at the time Veronika discovered her husband’s affair, so she decided to make it public knowledge. Well, hell hath no fury like a third wife scorned!

So the question is: “Who is this woman with whom Veronika Obeng’s husband cheated on her with?” Unfortunately, there is no information on that, but Veronika is very clear that she knows who the mistress is. That’s not all. She also says that her husband cheated on her with prostitutes, as well! Veronika says that she had no idea that things would turn out like this when she signed up for the show. However, the “negativity” with Obeng started almost immediately —within a week after shooting started!

“I decided to live my truth because so many women don’t. And I thought, ‘Why did I sign up for a reality TV show and not live my truth?’ I refuse to be a prisoner to the camera or my situation,” says Veronika, angry that some people are blaming her for Michael Obeng’s cheating. “Why should I be embarrassed? You cheated on me. Why should I be embarrassed that you like hookers?” she continued. When asked about what the future holds for her, Veronika explains, “Life doesn’t stop when you find out your man has been unfaithful. That’s when it gets real.” It’s obvious that she is in pain at the breakdown of her marriage. But what about the other woman? At this time there is word from the other end, but we hope it will just be a matter of time until we do.