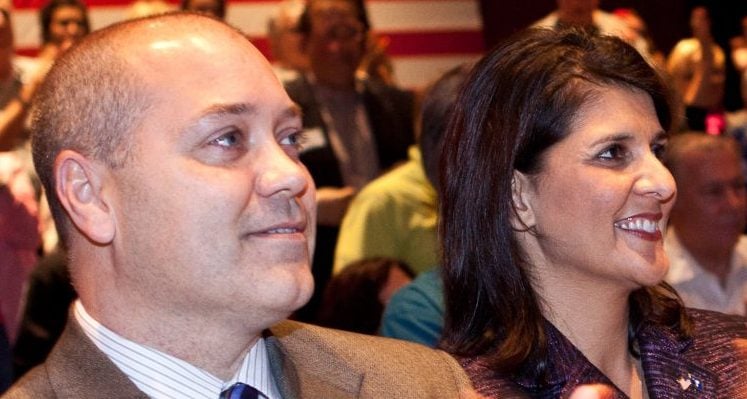 Michael Haley is married to prominent politician Nikki Haley, who is currently the target of a vicious rumor linking her to President Trump. Michael and Nikki Haley met when they were students at Clemson University and have been together ever since. Michael Haley is a pillar of strength for his family, and now, Nikki Haley needs him more than ever.

It takes a man strong of mind and heart to be the husband of an accomplished woman like Nikki Haley.

She is the current United States Ambassador to the United Nations, and before this, Haley was the governor of South Carolina. While she is mostly in the news because of her excellent work, right now, Haley is facing rumors of having an affair with President Donald Trump.

The culprit behind these rumors is Michael Wolff, the author of the controversial book, Fire and Fury. He said in an interview with Bill Maher that his book contained a clue about someone who was reportedly having an affair with President Trump.

After reading the book, readers have been speculating that this person might be Nikki Haley. Haley herself has described the rumor as “disgusting” and said that she had to face these types of accusations all her working life.

In light of the Nikki Haley and Trump affair rumors, people may now be wondering about of the most important person in her life, her husband, Michael Haley. We have details from Michael Haley’s wiki, so keep reading to know more about him.

Before earning a degree in business administration from the University of North Carolina at Charlotte, Michael Haley attended Hilton Head Preparatory School.

Nikki Haley and Michael Haley had two wedding ceremonies as they are from different faiths. While Michael Haley is a Christian, his wife is a Sikh whose family is originally from the state of Punjab in India.

The couple had a Sikh marriage ceremony in 1996 followed by a ceremony at St. Andrew By-The-Sea Methodist Church in Hilton Head, South Carolina.

Michael Haley worked at Exotica International, a clothing store founded by his mother-in-law, Raj Randhawa, before he joined the South Carolina Army National Guard as a full-time federal military technician in 2006.

In 2012, Haley went to war-torn Afghanistan for a year-long tour of duty as a captain in the South Carolina Army National Guard.

Joining the Fight against Drugs

Haley also served as a liaison officer between the military and civilian authorities in Afghanistan. He is believed to be the first spouse of any governor to serve on active duty in a war zone.

The Marines were won over by Haley, and they nicknamed him the First Gentleman of South Carolina (FGOSC) on the lines of First Lady of the United States.

Today, Michael Haley is an officer in the South Carolina Army National Guard. He serves the country in his usual quiet way without drawing any attention upon himself.

A Believer in Cultural Diversity

Michael Haley’s kids are named Rena, a daughter, and Nalin, a son, and they are very attached to him. Haley simply adores his children and tries to spend as much time as he can with them despite his busy schedule.

Haley wants his kids to grow up in a multi-cultural environment as he has married a woman from another faith and believes in diversity.

Right now, Michael Haley is supporting his wife as she defends herself against the rumor of her affair with Trump, which has obviously disturbed her and her family.

Haley said, “This isn’t something that’s just happened as a Cabinet member: I saw this as a legislator, I saw this when I was Governor, I see it now, I see them do it to other women.”

Nikki Haley is determined to fight these rumors linking her to Trump, and her husband has to go through the painful process of having to listen to them. However, Michael Haley is a strong man and will surely weather the storm.