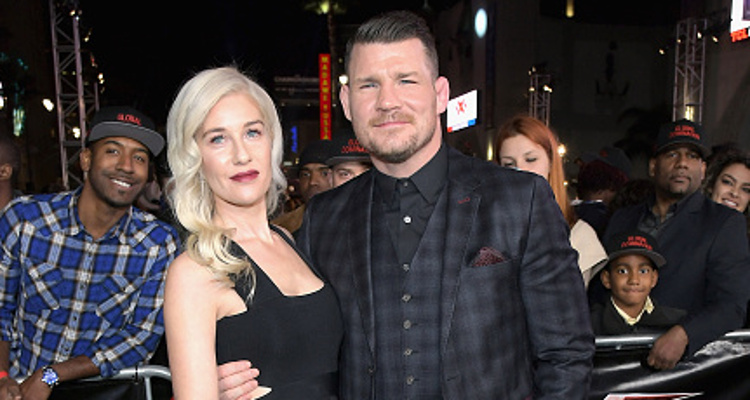 Michael Bisping is a UFC champion and is married to Rebecca Bisping. The 38-year-old middleweight champion is in the news for a near-death drowning experience he had in Hawaii while on vacation. On the same trip, the family’s rental car was broken into, and all of their belongings were stolen! Read on to know all about Michael Bisping’s wife, Rebecca Bisping and more about their unfortunate series of events in Hawaii.

People go on vacations to relax, but it was exactly the opposite for the Bisping family! The UFC champ, along with his wife and kids, headed to Hawaii for an adventurous vacation. Well, they got just that and some! Rebecca Bisping and Michael Bisping share three kids, and they are a family who loves to travel. Find out all you need to know about Rebecca Bisping in our bit on the UFC champ’s wife.

What Happened in Hawaii?

While Michael Bisping was on vacation in Hawaii with his wife and kids, their belongings were stolen from their rental car while the family was visiting a waterfall. They decided not waste the day by returning the car right away, so continued driving their damaged rental car. But then, while parked in a valet lot, Bisping’s running shoes were also stolen from the vehicle, as the back window was already smashed in. And as if that wasn’t enough bad luck for one vacation, the family faced more problems while the Bipsings spent time with MMA fighter Kendall Grove and his family. While paddle boarding, Bisping and his daughter Ellie ran into some trouble when the wind started picking up.

Bisping abandoned his paddle board in an attempt to pull his daughter Ellie to shore. Bisping felt they were making no progress as they continued to drift further away from shore and the two other women they were with, were also having trouble. Finally, a rescue boat showed up, but the two women and little Ellie were the only ones who could fit on it. Bisping insisted the girls get in, and he would swim back alone.

“Me being a macho d–khead, I go ‘yeah yeah yeah I’m fine, I’ll swim back,’ because I assume there’s no room for me. So they all disappear, go off in the distance and I’m thinking ‘I don’t f—-ng believe this, me and my ego, rather than just say ‘I need help also,’ I’m going to drown now,” recounted Bisping in an interview with MMA Fighting.

Eventually, the lifeguards came back for him, and he was able to recount the ordeal with some humor on his podcast.

Facts to Know about Rebecca Bisping

Rebecca Sidwick married Michael Bisping in 2014 and the wedding was fit for a UFC champion! After all, the couple were introduced by UFC announcer Bruce Buffer with an official-sounding, “Presenting… standing five feet six inches tall, she has trained for this day for 15 years, hailing from Adelaide, Australia; Rebecca!” We’re just surprised they didn’t have a boxing bell! Ding!

Rebecca and Michael Bisping have three children together; Lucas, Callum and Ellie. The Bispings are one happy family and they love to travel. In fact, most of Rebecca Bisping’s recent Instagram posts showcase the family’s vacation —without all the hardships, of course!

Had a fun little beach day

Rebecca Bisping is from Adelaide, Australia, where she was born and raised. The couple have two dogs at home, who are clearly welcome members of the family!

The couple’s oldest son, Callum went to prom this year. His proud mother posted a picture of her son and his date on social media, which she captioned “#powercouple.” Michael commented on the picture of his son saying, “Wow he looks so handsome.”

Rebecca Bisping is a doting mother and wife. She loves her family and constantly posts about them on social media. Her bio even reads, “Mother to three amazing human beings, that’s it!” She always puts her kids first, which is why she stayed at home to raise them —and she loves it!

Awesome day, now for an awesome dinner at @andiamolv