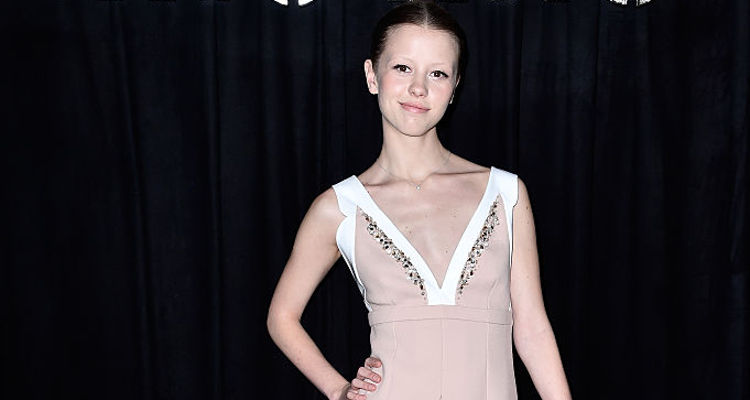 Shia Labeouf is known for his eccentric behavior, so it should come as no surprise that he just got married to his long-term girlfriend, Mia Goth in a chapel in Las Vegas. According to a video online, his marriage was officiated by none other than an Elvis Presley impersonator.

Mia Goth and Shia Labeouf have been dating for quite some time now. In fact, last year Mia was spotted wearing an engagement ring! However, there is more to know about Shia Labeouf’s wife. So, if you are just hearing her name for the first time and are wondering who is Mia Goth, then you definitely need to scroll down and find out information about her!

She Spent Most of her Childhood in Brazil

She was born as Mia Gypsy Mello Da Silva Goth in the year 1993, in Southwark, London. If you are wondering how old is Mia Goth, then you should know that the newly-wed bride is 23 years old. During her childhood days, she moved to Brazil to be raised by her Brazilian mother.

Mia Goth’s grandmother is a famous Brazilian actress named Maria Gladys. When Goth was twelve, she moved back to London. Her father was born in Canada and the family used to commute a lot between Brazil and London, before Mia decided to pursue modeling.

When she was thirteen, Storm Model Management hired her as one of the models. Her career kick-started at the age of 15 when stylist/photographer, Gemma Booth spotted her at a music festival in Victoria Park, London. Eventually, Goth ended up working with Storm Modeling Agency, where she signed her first ever contract with the group.

Besides modeling, she even gave acting a try. Mia Goth’s Instagram account is filled with pictures of her modeling. Her debut movie was in the year 2013, where she played the role of “P” in the erotic-drama film, Nymphomaniac: Vol. II. Later on, she appeared in a TV series known as The Tunnel. In the year 2014, Goth also appeared in a music video called “Haunted Love” directed by her then boyfriend, Shia Labeouf.

Apart from this, she has appeared in several other movies such as Magpie, The Survivalist and Everest. Her next movie, A Cure for Wellness is all set to release in February 2017.

She is Officially Shia LaBeouf’s Wife

Mia Goth and Shia LaBeouf met each other on the set of Nymphomaniac. They started dating in 2012 and if you are wondering if their relationship was always smooth sailing, then you are highly mistaken. Last year, a video emerged, wherein, both of them could be seen yelling at each other in the street in Germany. The argument escalates and LaBeouf leaves with a couple of German locals, who offered to drive him to the airport. In the video, Shia even admits to the locals that if he would have stayed there, he would have killed her.

Even though the couple have not yet made it official, there are many videos of the ceremony circulating online. Upon watching, it’s clear that the pair got married secretly in a chapel in Las Vegas, with an Elvis Presley impersonator officiating the whole thing.

Well, we certainly didn’t expect anything different from LaBeouf. Shia LaBeouf’s net worth is estimated to be around $25.0 million so we wonder if the pair will indulge in an extravagant house, now that they are married!