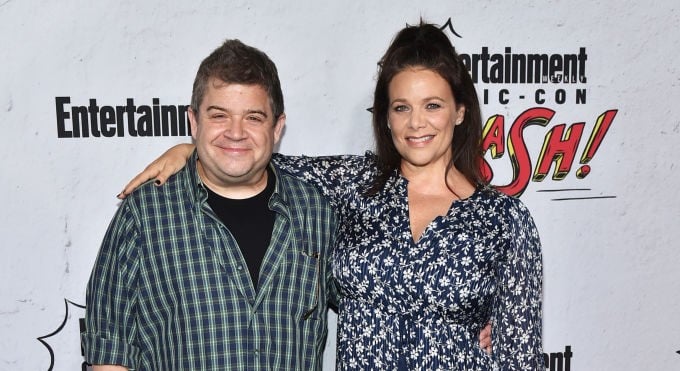 In July 2017, Patton Oswalt proposed to his girlfriend and announced the news in several social media posts. Patton Oswalt’s fiancée, Meredith Salenger, also shared the news on her Instagram, writing, “It’s official. I’m the luckiest happiest girl in the universe!!!! I love you @pattonoswalt I love you Alice Oswalt! #YesYesYes”. The comedian didn’t take a break from cracking a joke even then, tweeting, “I put the ring in a marzipan Slave I replica and said, ‘Will you be my Padawan of Love?’ She maced me but said yes later.” Meredith Salenger, age 47, has been a positive impact on Oswalt, since the death of his wife. They only dated a few months, but were never shy about showing their affection online. According to a source, they met through a mutual friend and started chatting as friends. It eventually blossomed from there.  some fans suspected that the couple were talking about marriage, as they often joked and signaled about their intentions over social media. Salinger even hinted about their engagement on Instagram. Check out this pic of Meredith Salenger to see what she wrote.

Oswalt is also very fond of his fiancée, saying in an August interview, “If I really boil it down, she brings me–and I’ve rarely experienced this with someone–excitement and calm, which sounds contradictory. I’m excited, but because she gives me something that is so secure and calming, I don’t have to question and worry about it. There are no mind games. I’m calm enough to let the excitement really grow, you know?”

What Happened to Oswalt’s Former Wife?

Comedian Patton Oswalt talked about “the most horrific 12 months I’ve had to wait through in my 48 years on the planet,” according to his own words. this follows the death of his wife, in April 2016. He devoted the final half-hour of his special, Annihilation, dealing with his grief, and his comments were darkly funny, and emotionally vulnerable. According to results from the investigation, which took almost a year to finalize, Oswalt’s wife died due to prescription medications combined with an undiagnosed heart condition.

The couple married in 2005, and neither of them had any idea that she had a condition that cause blockages in her arteries. The prescription drugs that she took to help her sleep in April 2016, included Adderall, Xanax, and the pain medication Fentanyl. She died in her sleep, but Oswalt was unaware until later the next day. He woke up and got his seven-year-old daughter ready for school, dropping her off. He didn’t check on his wife until later that afternoon, to see if she had woken up. When he did check on her, she was still lying in bed but she wasn’t breathing. When the paramedics arrived they pronounced her dead at the scene.

Several months later he opened up about the incident and how it has affected him and his daughter. “This is my first time being a single father. I’ve missed forms for school. I’ve forgotten to stock the fridge with food she likes. I’ve run out of socks for her. I’ve run out of socks for me. It sucked and it was a hassle every time, but the world kept turning. I said, ‘Whoops, my bad,’ and fixed it and kept stumbling forward,” he said.

We are happy to see that Patton Oswalt and Meredith Selanger could find love, even after such devastating loss.