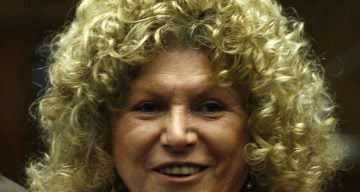 Like the O.J. Simpson case, the Menendez Brothers’ trial was highly publicized in the ‘90s. Erik and Lyle Menendez were accused of killing their parents, Kitty and José Menendez. Law & Order True Crime: The Menendez Murders is a dramatization of the case. It premiered on September 26, 2017, on NBC.

The Menendez brothers’ defense lawyer was Leslie Abramson. Her role on the show is portrayed by Edie Falco. What is Leslie Abramson doing these days? Keep reading to find out.

Born on October 6, 1943, in Flushing, Queens, New York, Leslie Abramson’s age is 73. She graduated from Queens College and, in 1969, earned a Juris Doctor from the UCLA School of Law.

In 1970, Abramson was admitted to the State Bar of California. She started her career in the Los Angeles County Public Defender’s office and worked there for six years.

Abramson started her private practice as a defense attorney in 1976. She earned the reputation of being “a 4-foot-11, fire-eating, mud-slinging, nuclear-strength pain in the legal butt.” She was extremely good at her job and was twice named trial lawyer of the year by the L.A. Criminal Courts Bar Association.

A post shared by Extraordinary Stories Podcast (@extraordinarystoriespodcast) on Jul 2, 2017 at 2:51pm PDT

Besides being the Menendez brothers’ lawyer, Abramson handled many high-profile cases.

In 1988, her client, 17-year-old Arnel Salvatierra, was sentenced to probation after Abramson brought to light the fact that her client’s late father was abusive. Two years later, she won the acquittal of Dr. Khalid Parwez.

Her most significant break came when she represented Erik and Lyle Menendez. Abramson took their case almost after six months after their parents, Kitty and José Menendez, were killed in their Beverly Hills mansion on August 20, 1989.

After the March 1990 investigation, the Menendez brothers were arrested and charged with killing their parents. About the brothers, Abramson said, “I’ve represented people charged with murder for 27 years, and these guys just don’t measure up to anybody else I’ve ever represented,” further adding, “These are not murderers. These are troubled kids in a very difficult and grotesque home environment, and they cracked.”

Although she was a brilliant lawyer, Abramson’s efforts did not pay off during the Menendez brothers’ trial. She was upset and shocked when her clients were sentenced to prison without parole in 1996.

Abramson could not do much for the brothers. In 1997, she published a book, The Defense Is Ready: Life in the Trenches of Criminal Law. Her career as a lawyer did not end after this case.

In 2004, Phil Spector hired her to represent him after he was charged with shooting actress Lana Clarkson. But Abramson did not want to represent Spector due to differences between them and dropped the case.

Currently, there is no information about Leslie Abramson’s net worth.

In 2001, Abramson and her husband, Los Angeles Times reporter Tim Rutten, moved to a home outside of Los Angeles. Shee has a seven-year-old adopted son, as well as a daughter named Laine, from her first marriage to a pharmacist, who she divorced in 1969.

Abramson is reportedly retired and is a little public shy. In fact, Law & Order True Crime: The Menendez Murders  showrunner, René Balcer said Abramson made it clear that she has nothing to do with the show. Balcer also added that Abramson is living a nice retirement life.

“I spoke to someone who worked with her during the time that all this was going on.” Edie Falco, who plays Leslie Abramson on the show, said, “This kind of broke her heart. She’s not doing this anymore. She now works in a toy store, apparently.”