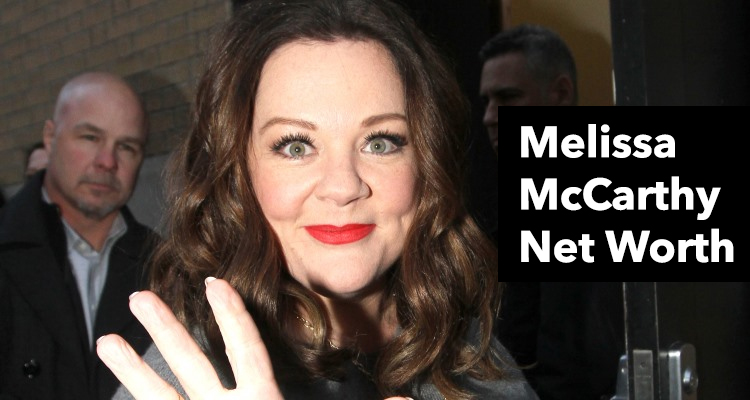 Have you ever wondered how much A-list comedians make? Melissa McCarthy’s net worth is impressive, especially now that Forbes has named her the second highest paid actress of 2016! Since her first role on Gilmore Girls (2000-20007), she has certainly made a name for herself. If you want to know more about Melissa McCarthy’s daughters and husband, Melissa McCarthy’s height, movies, clothing line and the Melissa McCarthy death hoax, keep on reading.

Melissa McCarthy’s net worth is a whopping $20 milliondollars!

Born August 26, 1970, this actress made her first claim to fame from her role as Sookie St. James on the hit TV series,

Gilmore Girls. Melissa McCarthy’s movies are often met with great reviews, but her most defining role came from her performance as Molly in Mike and Molly (2010-2016). For that role she earned a Primetime Emmy Award for Outstanding Guest Actress in a Comedy Series! Also known for her role as Megan in Bridesmaids (2011), McCarthy earned an Academy Award nomination for Best Supporting Actress, a BAFTA nomination and Screen Actors Guild Award nomination for the same.

I’m so excited to share #theBoss with everyone April 8th! Today has been such a fun press day.

McCarthy was born in Plainfield, Illinois but was raised on a farm to a large Irish Catholic family. Her father, Michael McCarthy, carries Irish descent, while her mother, Sandra McCarthy, has English, German and Irish roots.

Melissa McCarthy’s husband and daughters are her main focus when she isn’t filming scenes to make people laugh. On weekends she enjoys taking a break from promoting her movies with her family, doing normal, family things. Balance is key! McCarthy’s husband is Ben Falcone and the two have two daughters: nine-year-old Vivian, and six-year-old Georgette, or “Georgie.”

Skating at Rockefeller in NYC!

She Teams Up with Her Husband on Movie Projects

McCarthy and Falcone are a match made in heaven – the two teamed up for Tammy (2014) and The Boss (2016) and are currently working on their upcoming film Life of the Party, which will hit theatres in 2018. This time, the couple won’t be on screen together — McCarthy will be starring in the film, while Falcone will direct off the screenplay the couple wrote together.

The dynamic duo live together in a massive six-bedroom, seven-bedroom house in Toluca Lake, California. They spent a fortune to upgrade the $5 million Spanish colonial home into their dream mansion. Their property includes a brand new 46ft by 16ft swimming pool, a sauna, gym and guest house! Living in the lap of luxury!

She Has a Clothing Line

Did you there is a Melissa McCarthy clothing line? The actress teamed up with Penningtons to bring a full line of comfortable and beautiful plus-sized clothing. Visit the Penningtons’ website to preview the latest fashions!

Bernie endorsed @hillaryclinton!!!It makes me shout for joy from the rooftops of NYC!!!!

She was a Victim of a Death Hoax

The Internet blew up when news spread of Melissa McCarthy’s death. As it turns out, the report from August 2016 was confirmed to be a total hoax. Celebrity death hoaxes have always surprised us, so we’re thankful McCarthy is very much alive.

The rumor first set fire after someone created a “R.I.P. Melissa McCarthy” Facebook page. Gaining almost one million “likes,” people posted on the page sharing their condolences. Twitter also blew up with news of the actress’ alleged death. Her representative said it perfectly in response to the news, “She joins the long list of celebrities who have been victimized by this hoax. She’s still alive and well, stop believing what you see on the internet.” Well said!

With a net worth of $20 million, and an average annual salary of $33 million, McCarthy is rising up the charts! With a figure like that and the success she’s made so far, we have high hopes she will reach the stars.