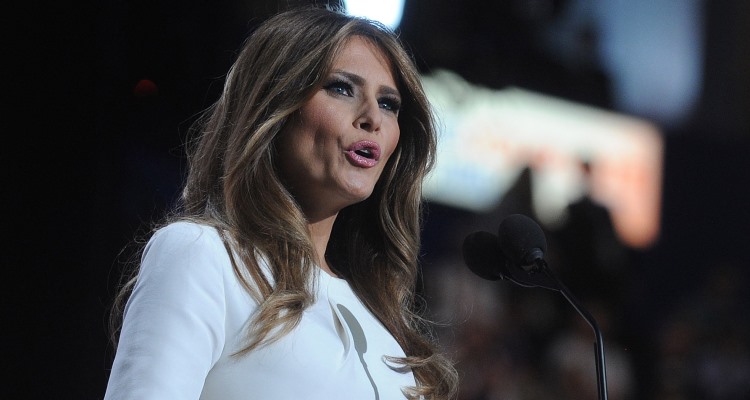 As noted, “how old is Melania Trump?” has been a popular question since the Republican National Convention started. Well, the current Donald Trump wife, then named Melanija Knavs, is 46 years old, and was born on April 26, 1970 in Yugoslavia (now Slovenia). She moved to Italy after starting her modeling career, and appeared on the cover of numerous well-known magazines. She later moved to New York City in 1996, which is where she met her husband. The current Melania Trump net worth is estimated to be around $11.0 million as of 2015, according to NetWorthO.com.

Donald Trump and Melania Trump met in 1998 at a party being held to celebrate New York Fashion Week. While Trump was at the party with a different woman in tow, he went and talked to Melania the moment his date had left his side to use the bathroom. In a rare instance of somebody saying “no” to Trump, she refused to give him her number when he asked. She did not want to be just another woman that he called but she wanted to know more of why he approached her. So, she requested that he give her his digits, instead. Not only did he agree, but he gave her more than one phone number to reach him at!

Donald Trump and Melania Trump were wed on January 22, 2005 in Palm Beach, Florida at a reception that was attended by many celebrities, to which of course they spared no expense. Their first and so far only child together, Barron William Trump, was born in 2006. Of course, her husband Donald Trump has previous wives and kids—four children, to be exact—so it could be said that the number of Melania Trump kids is five. There doesn’t seem to be much pertaining to Melania’s relationship to Donald’s other kids, but she clearly loves Barron, seeing him as a miniature version of her husband.

The Melania Trump speech given at this year’s Republican National Convention is possibly the main reason the woman is receiving so much media attention, and not for good reason. While the speech praising her husband was initially well received and full of what could have been famous Melania Trump quotes, everything changed when the speech was found to contain instances of plagiarism. Quotes were taken verbatim from a similar speech delivered by Michelle Obama at the Democratic National Convention in 2008. The Trump camp is still scrambling to determine who is to blame and whether anyone will admit to plagiarism or not. You can bet people have gotten a lot of great Melania Trump memes out of it in the meantime, though!

If Donald Trump becomes President, then Melania Trump will have the dubious honor of being the first and only First Lady to have ever posed nude. The Donald Trump wife, Melania Trump, posed nude for GQ in 2000, on a private jet that was owned by Donald Trump. You obviously don’t “see” anything in the photos, but as far as residents of the Oval Office go, it would definitely be a first!