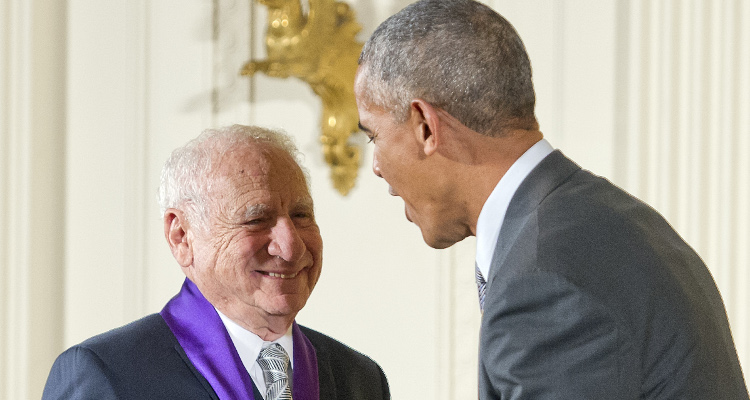 Mel Brooks is an American actor, comedian, filmmaker, composer, and songwriter. He is well known for his film farces and comic parodies. He is in the news lately because he was given a prestigious award by President Obama on September 22, 2016. True to his nature, Mel Brooks pranked Obama in the way only he can. Brooks pretended to pull down President Obama’s pants as Obama put the National Medal of Arts around Brooks’ neck. People were laughing at his childishness, wondering “How old is Mel Brooks?”. Brooks is exactly 90 years-old but his robust sense of humor has not yet deserted him.

People are also curious about Mel Brooks’ net worth—it is a healthy $85.0 million.

Check out the Mel Brooks wiki page on the Internet.

Mel Brooks has a unique ability to make people laugh. Brooks began his career as a comedian and a writer for the TV show, Your Show of Shows. He also created the hit TV show Get Smart which had a successful five-year run. Brooks came into his own when he turned his attention to movies. Some of Mel Brooks’ movies include The Producers, The Twelve Chairs, Blazing Saddles, Young Frankenstein, Silent Movie, High Anxiety, History of the World Part I, Space Balls, and Robin Hood: Men in Tights. His movies are hilarious and have grossed millions at the box office. The best antidote for a sour mood is a classic Mel Brooks movie.

Mel Brooks’ wife was the famous actress Anne Bancroft. They were married for 41 years when Bancroft died. Brooks was a man who made people laugh with everything he did. Below are some of Mel Brooks’ quotes:

“Tragedy is when I cut my finger. Comedy is when you fall into a open sewer and die.”

“As long as the world is turning and spinning, we’re gonna be dizzy and we’re gonna make mistakes.”

“Bad taste is simply saying the truth before it should be said.”

“You got to be brave. If you feel something, you’ve really got to risk it.”

Younger people should be excused if they ask, “Who is Mel Brooks?”. They should be told that Brooks is one of the original funnymen of Hollywood films. On the gloomiest of days he can make the sun shine with his sense of humor. That is something we all need, irrespective of age.