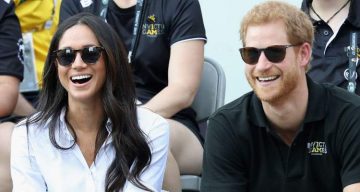 The most awaited Royal proposal announcement was made on November 27, 2017. Prince Harry and Suits actress Meghan Markle are engaged! The start to their love story is quite different and it is straight out of a romance, making us all believe that sometimes dreams really do come true. Currently, Meghan Markle and Prince Harry’s engagement is the talk of the town. But let’s go back to the roots of their relationship. How did Meghan Markle meet Prince Harry? We’ve got the scoop!

The Royals have been notoriously private about their personal life for obvious reasons. But that doesn’t stop the Paparazzi and curious fans from wanting to know what goes on behind the closed doors of the palace. People all over the world are intrigued by the personal life of the Royal family. And since last year, Prince Harry has been vocal about his relationship with actress Meghan Markle. Recently, the sweet couple took their relationship to the next level by getting engaged! Meghan Markle and Prince Harry’s interview about their big news revealed the details about how the proposal went down. They also gave details on how they met and who introduced the two of them. Keep reading for all the details!

Markle and Harry were set up on a blind date by a mutual friend in July 2016. Out of privacy, both of them denied revealing her name. However, some sources claim that it could be fashion designer Misha Nonoo, who is a mutual friend of both. Other names have also cropped up as their “matchmaker” but nobody is sure who set them up. In the interview, Harry said, “We first met – we were introduced actually by a mutual friend, who – we will…” But Markle interrupted, “We should protect her privacy and not reveal too much of that.” Looks like she’s already getting used to keeping mum on certain things!

In the interview, Harry revealed that at first, Markle’s name didn’t ring a bell and he didn’t know who she was. Markle also said that she didn’t know much about Harry. So, when her friend decided to set them up, the only thing Markle wanted to know was, “Is he nice?” Markle went on to explain, “Because I’m from the States you don’t grow up with the same understanding of the Royal family. And so, while I now understand very clearly there is a global interest there, I didn’t know much about him and so the only thing that I had asked her when she said she wanted to set us up was, I have one question: ‘Well, is he nice?’ “Because if he wasn’t kind it just didn’t seem like it would make sense.”

Prince Harry added, “And – but it was – it was literally – it was through her and then we met once and then twice back to back two dates.” He further explained, “And then it was I think about three, maybe four weeks later that I managed to persuade her to come and join me in Botswana. And we – we camped out with each other under the stars, we spent – she came and joined me for five days out there, which was absolutely fantastic.”

Prince Harry is Madly in Love with Meghan Markle

In the same interview, Harry revealed, “I fell in love with Meghan so incredibly quickly… All the stars were aligned – everything was just perfect. It was this beautiful woman just sort of literally tripped and fell into my life – I fell into her life.”

Harry and Markle’s proposal was home-grown when they both were spending quality time in the kitchen, trying to roast a chicken. With the mood set, Markle revealed that it was a fantastic surprise and was indeed very romantic. Harry got down on one knee and popped the question.

Markle also revealed that she didn’t let him finish the proposal! Harry said, “She didn’t even let me finish. She said, ‘Can I say yes, can I say yes?’ and then there were hugs. I had the ring in my finger and I was like ‘Can I give you the ring? She goes, ‘Oh yes! The ring!’ So, no it was – it was a really nice moment, it was just the two of us and I think managed to catch her by surprise, as well.”

Reportedly, Markle and Harry are planning to get married in Spring 2018. Markle also revealed that after her wedding, she intends to retire from acting and focus on humanitarian causes. If you want to watch the entire interview of Meghan Markle and Prince Harry, then click on the link below! It’s adorable! Also, give us your opinion about the royal engagement in the comments section below.